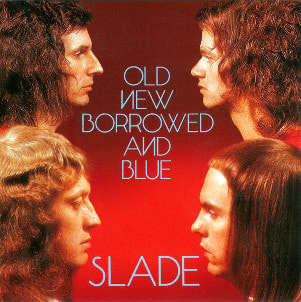 Old New Borrowed and Blue is Slade's fourth studio album, released by Polydor on 15 February 1974 and produced by Chas Chandler. It reached No. 1 in the UK and remained on the chart for 16 weeks, also earning a Gold certification from BPI . For the album, Slade attempted to begin breaking away from their usual rock formula. For example, the singles "My Friend Stan" and "Everyday" were piano-led and did not have the typical "Slade" sound.

In the US, the album was released by the Warner Bros. label under the title Stomp Your Hands, Clap Your Feet, minus the tracks "My Town" and "My Friend Stan" (as they had been previously released there on Sladest).

Background
Old New Borrowed and Blue was recorded amid various touring and promotional activities in late 1973, and also during the headline-making recovery of drummer Don Powell, who was involved in a near-fatal car crash in July, briefly throwing the band's existence into doubt. Despite his critical condition, Powell was able to make a recovery and the band soon entered the studio to record material for their new album. During recording of "My Friend Stan", Powell was still walking with the aid of a stick and had to be lifted onto his drum stool. On the album, the band attempted to continue their usual formula on some tracks, while others took a change in musical direction. The album's title, as explained by Holder, came from the album's content, which the band felt had a mix of old, new, borrowed and blue songs.

"My Friend Stan" was released as the album's lead single in September 1973 and reached No. 2 in the UK. Over Christmas 1973, the band would also achieve success with their No. 1 single "Merry Xmas Everybody". Old New Borrowed and Blue was released in February 1974, reaching No. 1 in the UK, where it was also awarded Gold by BPI prior to its release, based purely on pre-order sales. At the time, a Slade spokesman had reported to the Record Mirror: "The album has sold twice as many cartridges and cassettes than their previous offerings." In March, the album's second single "Everyday" reached No. 3. In America, Stomp Your Hands, Clap Your Feet reached No. 168. "Good Time Gals" was issued there as a single in February 1974. Later in May, "When the Lights Are Out" was also issued in America and Belgium. Both singles failed to make any chart impact.

Speaking to the Slade fan club in late 1973, Don Powell commented: "We've just finished recording our next album. It's got a lot of new things on it. Nothing very different or out of character, we've spent more time on arrangements and little ideas and effects."