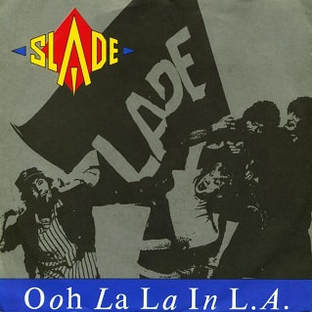 Ooh La La in L.A. is Slade's third single from their fourteenth studio album You Boyz Make Big Noize. It was released in 1987 by CBS in the United States as a promotional-only single and by RCA in Europe as a full single release. The song was written by Noddy Holder and Jim Lea, and produced by John Punter.

Background
"Ooh La La in L.A." was released following the band's limited UK and European success with You Boyz Make Big Noize. Both preceding singles from the album, "Still the Same" and "That's What Friends Are For", failed to achieve major commercial success. "Ooh La La in L.A." was released by RCA in the summer of 1987 as the album's third single, but in Germany only, where it failed to generate commercial success.

In the United States, the song was released by CBS as a promotional single, with intentions of giving it a full release depending on its success on radio. The music and radio trade magazine Hard Report announced in July 1987 that WHCN, WHJY, KATP, KSQY, WRDU and WMRY stations had actively played the track, but the limited attention resulted in CBS scrapping plans for a full release. You Boyz Make Big Noize was released in the US in August 1987 and failed to chart.

"Ooh La La in L.A." was written in 1984 during the writing sessions for the band's 1985 album Rogues Gallery. The lyrics, written by Holder, details the band's experiences in America while promoting their 1984 hit single "Run Runaway". The song also refers to the brief headline news that Don Powell (referred to by his middle name George in the lyrics) was dating Bob Dylan's daughter (referred to as Miss Zimmerman). In a 1987 fan club interview, Dave Hill said: "This is my favourite track on the album. There is something about the chorus on this one, which to me would make it a hit if it was released as a single. It is a very different sort of song for Slade. The lyric is very autobiographical. One verse is about Don being pissed all the time. There is mention of the Marquee, which refers to The Sunset Marquee, where a lot of bands stay. There is a verse about Barney's Beanery, where we used to play pool all the time. This song was in fact written originally for the Rogues Gallery album and is based on the last time we were in L.A, promoting "Run Runaway"."

In Russia, "Ooh La La in L.A." remains one of the band's most popular songs. In a 2011 interview on Vintage TV, Hill said: ""Ooh La La in L.A." was never a hit for us, but in Russia it's huge. And it's a bit like how come it's huge in this massive country and yet it didn't happen here?"

The B-side on the German release was "Don't Talk to Me About Love", which had previously appeared as a B-side on the double pack edition of the band's "Still the Same" single. On the 12" single, a second B-side, "That's What Friends Are For", taken from You Boyz Make Big Noize, was also included. The artwork for the single was the same as used for the earlier 1987 single "That's What Friends Are For".

Promotion
A music video to promote the single in America was planned if the promotional single had gained sufficient airplay to warrant a full release of the single. In a fan club newsletter of the time, it was revealed that the video would be filmed in Los Angeles to include the various scenes described in the lyrics such as the Sunset Strip and Barney's Beanery.

Speaking of the scrapping of the video idea, Lea said in a 1987 fan club interview: "Well, when you are dealing with record companies, it all comes down to money, power strokes and the way they think a record is going to go. CBS deliberately held back on doing the video because, although they could see it picking up a few heavyweight stations, they wanted to wait to see if it picked up any more. It actually did pick up one or two more, but then suddenly tailed off, so the video idea was scrapped. It got to the stage when there was this small matter of many tens of thousands of pounds and who was going to pay? It is a bit different in the States in that the record companies are totally ruled by the business affairs people, whereas over here the A&R men run things."

In the UK, the band performed the song on the ITV show Get Fresh in August 1987, while promoting their UK-only single "You Boyz Make Big Noize". On the show, Holder states the band are two weeks away from shooting a promotional video for the song and that it will be on UK TV soon. Speaking of the band's performance on the show, Lea said: "It is actually a bit difficult to mime to material, having never played it on stage before. To start off with, we had all forgotten how "Ooh La La in L.A." went. You may have noticed Nod in one of the guitar breaks coming over to me as he was running up and down the frets of his guitar. There was an expression on his face as if to say "I don't know what the f**k I'm doing!" I enjoyed doing that TV and others like it, because there's no aggravation."