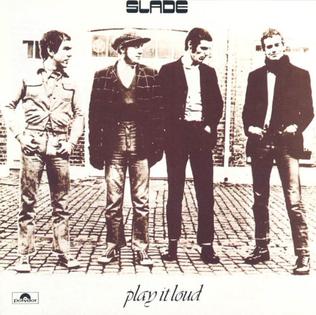 Play It Loud is Slade's second studio album, released by Polydor on 28 November 1970. It did not enter the charts. The album, produced by Chas Chandler, was the first to be released under the Slade name, as the band's 1969 debut Beginnings was released under the name Ambrose Slade.

Background
Following the lack of commercial success of their debut Beginnings, the band and their new manager Chas Chandler began considering their next career move. Having not been pleased with the debut album, Chandler thought the band would benefit from writing their own material and a change of image. He decided that the band should project a skinhead image in the effort to generate interest in the band. Both Dave Hill and Jim Lea were mortified by the revised image, but the band agreed to try the idea and adopted Dr Marten boots, braces, cropped hair and aggressive "bovver boy" posturing.

Coinciding with the new image, Ambrose Slade changed their name to "The Slade", which was used on their single "Wild Winds Are Blowing", released in October 1969. The single was another commercial failure. In March 1970, the band's next single, "Shape of Things to Come", was released but also failed to chart. As a result, Chandler soon moved Slade from Fontana to Polydor Records, believing a higher profile label would boost sales. The band continued recording songs for their next album, with Chandler assuming responsibility for the group's production.

For the album, much of the material was written by the band. Speaking to David Skan of Record Mirror in 1970, Holder said of the material: "They're not very London-cool songs but we are not that sort of group. In fact I get a little bit niggled by the cult of cool which is constantly being flogged round London. People should enjoy themselves. The sort of songs we are writing now require much more work than the sort of 12 bar blues riffs we used to base our stuff on."

In September 1970, "Know Who You Are" was released as the band's debut single on Polydor. However, it too was a commercial failure, as was its parent album, Play It Loud, when it was released in November. Afterwards, the band decided to drop their skinhead image and would achieve commercial success with their mid-1971 single "Get Down and Get with It". Speaking to Classic Rock in 2005, Noddy Holder recalled: "We got a lot of flak for being a skinhead band, so gradually we changed. We replaced Doc Martens with platform boots. We became more colourful and then it all went berserk - Dave the Superyob with his spacesuits and all the rest. It was a great laugh."

Later in 1973, the album would achieve commercial success in Canada after it was released there by Polydor, reaching No. 40. In a 1975 interview, Holder said: "Actually, Play It Loud did nothing at first. When it came out, we hadn't had any hit records, or any success, and it sold a few. It sold about ten thousand copies, something like that. But over the years, over the last four years since we've been having hits, it's still been selling slowly." In a 2018 fan Q&A, Lea said of the album: "I didn’t think our stage sound was represented on Play It Loud. Too dry."

Promotion
The band appeared on the UK show Disco 2 to promote the album. They made three appearances during 1970, performing "Shape of Things to Come", "Know Who You Are" and "Sweet Box". All three performances have never surfaced since broadcasting.