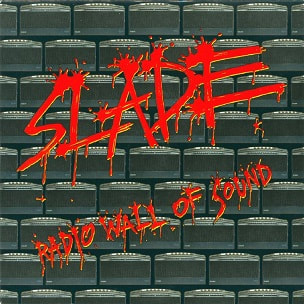 Radio Wall of Sound is Slade's first single from their compilation album Wall of Hits. Released by Polydor on 7 October 1991, it reached No. 21 in the UK charts and remained in the charts for five weeks. It was the band's last hit single, discounting later chartings of "Merry Xmas Everybody". The song was written and produced by Jim Lea.

Background
After the commercial failure of the band's 1987 album You Boyz Make Big Noize, and the end of their contract with RCA, Slade decided to take an eighteen-month break. Although the band announced their intentions to record a new album, these plans did not materialise. Later in 1991, the band's former 1970s label Polydor Records approached the band with the idea of recording two new singles to promote a new compilation album Wall of Hits. The two singles, "Radio Wall of Sound" and "Universe", were soon completed, with "Radio Wall of Sound" being released in October 1991. It reached No. 21 in the UK, earning the band their twenty-fourth Top 40 single and their first Top 40 hit since 1984.

The song gained much airplay in the UK and was voted the "Single of the Week" by listeners on Simon Mayo's BBC Radio 1 show. In November 1991, the song ranked No. 10 out of the UK's top twenty most-played songs on BBC and independent radio. It also achieved airplay across Europe and reached No. 5 on Holland's Top 20 most-played list, based on the national stations Radio 2 and Radio 3.

"Radio Wall of Sound" was originally a solo recording of Lea's, who had completed much of the song's recording prior to it becoming a Slade song. Lea first mentioned an unspecified song in an October 1988 fan club interview, weeks after he had recorded it, which is likely to have been "Radio Wall of Sound". In 1990, he referred to the track again, noting: "It sounds just like Slade, even my brother Frank says it sounds like Slade." In 1991, when Holder attempted to record his vocals on the track, the band realised that Lea's existing recording was not in his key. As a result, Lea performed the lead vocal, with Holder joining in during the chorus. To provide the DJ voice-over parts in the song, the band approached the broadcaster/presenter Mike Read. As part of the deal with Polydor, if both "Radio Wall of Sound" and the follow-up single "Universe" were successful, a new studio album would be recorded. However, "Universe" failed to chart and the album-option was withdrawn. The band would split up in 1992.

In a 1999 interview with Ken Sharpe, Lea spoke of the song's meaning and recording: "I had already done my demo of it and I was putting the band on top of my demo. During producing, Nod came to sing the verse and I said "Nod, I feel really embarrassed to say this but I think my voice sounds better than yours, not because I'm a better singer, that's ludicrous, it's just that the key is ridiculously low for you." And he said "Alright then..." cause Nod's very easy going. The track is about having a radio station in your head, music of the mind and this whole thing about the DJ all going on in your mind. You don't even need a radio, you can just imagine it."

Describing the song as a "more commercial, good instant rock track", Holder said of the single's performance in a 1992 fan club interview: "It wouldn't have needed that many sales to have reached that position, not a vast amount. The initial shipping out to the shops was around 30,000 copies, I think, which is a good pre-order figure, good enough to go Top 40 first week out. The problem was sustaining the momentum after using up all the available TV's there was nowhere else to go. We couldn't get on Wogan, which would have helped, so really that was all the TV possible. We did more press than ever before, in recent times at least, but there just aren't that many rock records making the charts these days unless they happen to come from a film soundtrack. The charts have been very dance orientated of late and I can't really think of any big rock records of 1991. If you look at the rock album charts from last year there are not that many that were really outstanding and had any long chart success."

In a 2000 interview with Mojo, Lea recalled of the song: "Our last hit was "Radio Wall of Sound", which I wrote and sang. The others thought it was a load of shit. The last thing that came out was "Universe" - very big and lush. Towards the end the records were completely my songs. I'd taken control and it didn't feel like a band any more. Then this offer came to play Castle Donington with Bon Jovi. Noddy said if we weren't headlining, then we weren't doing it. He more or less said that he wasn't going on the road with Slade again. He wanted to be in the band - but I said that without getting out live it wouldn't cohere any more, that we'd lost it. All the fun had gone out of it, so I started getting into the property business, and took a psychology course at college."

Recalling the song in his autobiography Seize the Day, Mike Read said: "The more I heard Jim Lea's song, the more I thought it was going to be a monster. It had a great tempo and a seriously catchy chorus, and was a terrific idea overall. They felt that the song needed a punchy American-style DJ delivery to give it some pace, so they asked if I'd pop up to the studio in north London."

In 1991, due to the song's radio-related theme, "Radio Wall of Sound" was specially modified for London's Capital Radio as a radio jingle. It was also used as a jingle on other stations including IFM and ILR.

Promotion
In the UK, the band performed the song on Top of The Pops and Motormouth. For the performance on Top of the Pops, the vocals were performed live. Lea used the opportunity to change the lyric "So just play the radio loud" to "So just turn that T.V. up loud".

Music video
A music video was filmed to promote the single, which was directed by William Clark and filmed in September 1991. Set on the roof-top of a radio station and featuring an appearance from Mike Read, the video featured the band performing the song. Towards the end of the video, the radio tower on the roof of the building explodes. The video achieved breakout rotation on MTV Europe.

In 2014, Clark recalled of working with the band for the Slade Discography Website: "I worked with Slade in the early 90s, writing and directing the videos for RWOS and Universe. Noddy was working at a radio station in Manchester and Jim was taking exams to become a psychotherapist. Don was the sweetest guy I met in the business and Dave was... well Dave. We shot RWOS at night on top of a BMW dealership on the A40 running out to the airport - those are real planes you can see behind the 50 foot RKO mast we had built to go on the roof. The blowing up of the mast was real too, and the shot we used was the last take. The idea was that it would explode as we lined up planes flying behind it so it would appear as if they would disappear due to the power of the track. The police had said we couldn't do it after midnight and as the clock ticked over, the pyro guys said they had enough explosive left for one more take. In truth they had enough for four or five more takes an Nod and co had persuaded them to pack it all into one last bang. This was ten years before 9/11 don't forget - so nobody really considered what we were doing - we were just being blokes and blowing things up. Unfortunately, as we were turning over, the police turned up to make sure we were obeying their curfew (and of course, meet Slade). The mast exploded with an deafening roar, and for a few moments everything went slo-mo and silent... The police were not amused and demanded to know who was responsible. As one, the whole band pointed at me... I really enjoyed working with the guys - they were fun, creative and up for anything - and really, really nice guys."