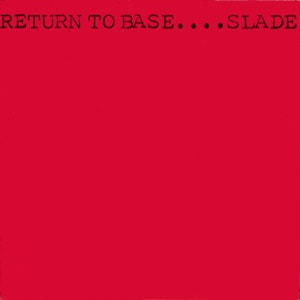 Return to Base is Slade's eighth studio album, released by Barn Records on 1 October 1979 and produced by Slade. The album failed to chart, continuing Slade's period of low popularity. Forced to play at small halls and clubs around the UK, the only income they were reliant on was Noddy Holder and Jim Lea's songwriting royalties. Their recent releases had sold poorly and they were no longer drawing in large audiences.

Following the band's revival at the 1980 Reading Festival, a number of tracks from Return to Base would reappear on the band's next studio album We'll Bring the House Down (1981).

Background
Having returned to the UK from the United States in August 1976, Slade found themselves out-of-favour at the time of the UK's punk rock explosion. The band's 1977 album Whatever Happened to Slade proved a commercial failure while their tour that spring had shown that they could no longer fill large venues. Slade's waning success soon saw them revert back to playing small venues, mainly universities and clubs. The band's tours often ran at a loss, with the band having to bring their own PA and lightshow.

In addition, the band's new records were barely selling. Now on manager Chas Chandlers' label Barn rather than Polydor, singles such as "Burning in the Heat of Love", "Give Us a Goal" and "Rock 'n' Roll Bolero" were all chart failures, along with the band's second live album Slade Alive, Vol. 2, which was the sequel to their critically acclaimed and commercially successful Slade Alive! (1972).

During 1979, the band began recording their eighth studio album Return to Base. The lead single, "Ginny, Ginny", was released in May 1979 but failed to chart, although it did enter the UK Top 200. Return to Base followed in October but also failed to chart, as did the second single released later that month, "Sign of the Times". The band continued to tour into 1980, but prior to their last-minute call up for the 1980 Reading Festival, they were on the verge of disbanding. Following their comeback, the band's commercial fortunes were revived with the release of We'll Bring the House Down in 1981, which featured a number of tracks from Return to Base.

Speaking of the album in a 1979 fan club interview, Dave Hill said: "I'm very satisfied with it. It's got a mixture of different types of songs on it, all of which adds up to it being a good album! My favourites are the rock 'n' roll one "I'm a Rocker" and the instrumental one "Lemme Love Into Ya" – probably because of the way that they come over on stage more than anything else." In a 1980 fan club interview, Noddy Holder said: "Over the last couple of years me and Jim have been writing a lot of songs, but we haven't known which way to approach them really. With Return to Base we were really pleased with the album, we thought that it turned out really well, but it didn't sell. Everyone around the band was saying to us that we weren't coming up with as good songs as we used to, but me and Jim knew that we were, we knew that we were coming up with strong songs. Some of the songs on Return to Base we thought were some of the best songs that we'd ever written. There only seemed to be me and Jim that had confidence in the songs; people like Chas, Dave and Don said that they didn't think our songs were as strong, some of them they did but some of them they didn't. But we ourselves thought that they were. Thus it was a case of getting the album down; and in our minds it turned out to be a great album."

Recording
Prior to recording sessions for the album, Lea said in a radio interview in late 1978: "Chas has just bought a studio in London which we'll be using in the future. It's all gonna be changed around in November and after that we'll be going in to start work on a studio album which we're really looking forward to." Holder added: "We've got lots of new songs we want to do and get our ideas across. Just lots of songs we like that we're just gonna try experimenting with and try new things on. We want to take another step on the ladder and just experiment and see how things work out. If the public like them, fair enough, but at least we're enjoying what we're doing."

The band aimed to record twenty songs, with the best eleven being put onto the album. In a 1979 fan club interview, Don Powell confirmed that seventeen tracks had been recorded at that time. The album was recorded over a period of six weeks and saw the band producing themselves for the first time. In a 1979 fan club interview, Hill said: "We each took it in turn to produce certain parts ourselves – which makes it the first album we have solely produced ourselves."

By the time of the album's recording, disagreements between the band (particularly Jim Lea) and producer/manager Chas Chandler had reached a climax. Recalling the situation in the 1984 biography Feel the Noize!, Holder said: "Jim was becoming more and more involved in that side of things. He wanted to produce the group and he didn't think that Chas was coming up with the goods." However, Chandler felt the band's current material was not as strong as their earlier work: "They felt that a great sound was the all important thing. I've always felt that the song comes first and you craft your sound to suit the song... not the other way round." Although Chandler offered to cut ties with the band completely, an agreement was struck that he would remain as manager while they produced themselves. Chandler said: "I agreed to this because if I refused I felt I would have been kicking them when they were down."

During the recording of Return to Base, Slade were persuaded by engineer Andy Miller to record a song he had co-wrote with Bernie Frost. The song, "Another Win", was recorded by Slade but remained unreleased. In 2011, the song emerged on the internet through the Slade in England website.

Release
Title and packaging
The album title is a line from "Sign of the Times". In response to how the album's title was decided, Hill said the band "had a whole list of suggestions for the title, and Return to Base is from one of the lines in the song "Sign of the Times"." In a late 1979 fan club magazine, it was stated that the album's title also described the band's actions of the time. Both Lea and Hill lived in Wolverhampton while Holder and Powell lived in London. By the album's release, all members were living in Wolverhampton.

Dressed in a plain red sleeve with the stark black title in a battered typeface, the album cover was intended to reflect a no-nonsense, back-to-basics, "never-say-die" attitude, although it was noted that "it ended up looking as threadbare as much of the public assumed Slade to be." Upon asking if the album's artwork had been designed, Hill replied "It's still being done, but I understand that it is going to have a photo of a ticker-tape message on the front saying "Return to Base", in computer-like lettering. But it should be a very basic cover – so that it ties in with the "basic" reference in the title."

Success in Belgium
While the album continued the band's commercial woes in the UK, the album became a big success in Belgium during 1980, reaching No. 1 there. The album's initial UK-only release saw many copies of the album being purchased by Belgian fans as an import. The album soon climbed to No. 1 on the Telemoustique chart, a weekly rock chart compiled by public votes. It also topped the Belgian radio station Impedance's daily chart on several occasions. As a result of the interest in the album, the album was released in the country by Warner Bros. in 1980. The album went on to become a big hit there, as did the Belgian-only single "I'm a Rocker".

In a 1980 fan club interview, Holder spoke of the success in Belgium: "What happened in Belgium was that Return to Base was available on import, and it started to climb the import charts. I don't know why, it was as much a surprise to us as it was to anybody. Warner Bros. Records then said to us, due to it starting to show some action, would we want to release it over there as a major release. We thought "why not?" – and now it's the number one album over there!" Speaking of "I'm a Rocker", Holder said: "That was the track getting the most airplay from the album. But it's not just a case of that applying in Belgium – we've had so many people writing to us asking why we've not released it as a single. "I'm a Rocker" is not even one of our songs though – it's a Chuck Berry number."