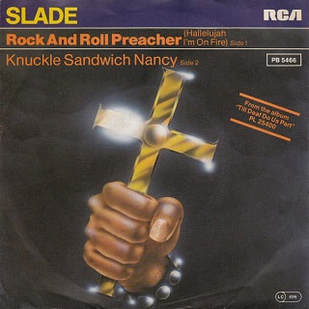 Rock and Roll Preacher (Hallelujah I'm on Fire) is Slade's fourth and final single from their tenth studio album Till Deaf Do Us Part. Released by RCA in Germany only in April 1982, it reached No. 49 on the charts. The song was written by Noddy Holder and Jim Lea, and produced by Slade.

Background
Following their revival after their performance at the 1980 Reading Festival, Slade signed a deal with RCA Records the following year. In November 1981, the band released the album Till Deaf Do Us Part. After the March 1982 release of the third single, "Ruby Red", RCA and the band chose to release "Rock and Roll Preacher (Hallelujah I'm on Fire)" as a single in Germany only. For its release as a single, the near-six-minute album version of the song was cut down to just over three minutes. The editing of the song was handled by Lea, Holder and Don Powell in January 1982. The song would reach No. 49 in the German charts.

For Slade's live-shows, the song would become the band's regular opener and would later appear as the opening track on the band's 1982 live album Slade on Stage.

Promotion
In Germany, the band performed the song on the TV show Musikladen on 11 March 1982. Later in December 1984, the band would perform the song again on the German ZDF show Thommys Pop Show.