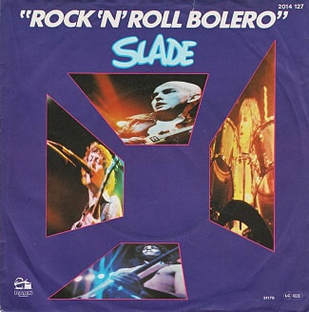 Rock 'n' Roll Bolero is a non-album single, released by Barn Records on 13 October 1978. It failed to make an appearance on the UK Singles Chart. The song was written by Noddy Holder and Jim Lea, and produced by Slade.

"Rock 'n' Roll Bolero" featured the return of Lea's electric violin; the first time on a Slade single since 1971's "Coz I Luv You". The song was originally recorded in June 1978 under the working title "I've Been Rejected". In July, the band re-recorded the song as "Rock 'n' Roll Bolero" at Portland Studios in London. It was the first single released under the Slade name to be produced by the band themselves, rather than Chas Chandler.

In a 1978 radio interview at the time of the single's release, Holder said of the song: "It's the first single we went in and produced ourselves. We had a chat with Chas who has always produced our records for the last nine years and we felt we were getting a bit of a stalemate. We talked it over and Chas said to us "It's about time you started producing yourselves or getting into the production side of it". So what we wanted to do was to make a record, the next single was for people to say "Give them a shot, that don't sound like Slade". I think that's what we've achieved with "Rock 'n' Roll Bolero", I think people are going to say "That don't sound like Slade", but it's a commercial sound and it's very different for us. We've used lots of violins on it and things like that, and it's just not us."

In a 1979 fan club interview, Lea said of the song: "The comment on "Rock 'n' Roll Bolero" is that it was different for Slade, but it was ordinary compared to everything else that was going around at the time. But I really dig the record myself!" He further added: "You see, when we walk on stage we can rip the arse off straight rock, but we can't do the same with "Rock 'n' Roll Bolero". It's great on record, but it's us thinking, it's not us being ourselves."

Release
"Rock 'n' Roll Bolero" was released on 7" vinyl by Barn Records in the UK, Belgium and Germany. The B-side, "It's Alright Buy Me", was exclusive to the single and would later appear on the band's 2007 compilation B-Sides. In France, the A-side and B-sides were switched, with "It's Alright Buy Me" becoming the A-side.