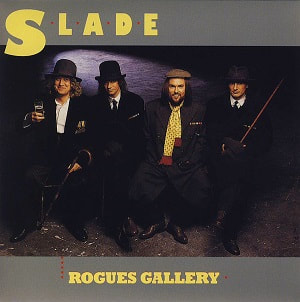 Rogues Gallery is Slade's twelfth studio album, released by RCA on 29 March 1985. It reached No. 60 in the UK charts. The album was largely produced by John Punter, with Jim Lea producing "Harmony", "I Win, You Lose" and "Time to Rock". For the album, the band set out to create an album of radio-friendly, potential hit singles which would be released as singles somewhere across the world.

The US version of the album, which was released on the CBS label, replaced "All Join Hands" with the band's 1981 UK hit "Lock Up Your Daughters" (which had originally appeared on the band's album Till Deaf Do Us Part).

Background
After the band's 1984 breakthrough in America with the Top 40 singles "Run Runaway" and "My Oh My", the band were to go on tour that year with Ozzy Osbourne for six weeks. Prior to the tour, the band played a few warm-up shows. However, on the first night of the tour with Osbourne, Slade had to cancel the remainder of the shows when Lea collapsed after the first gig and was diagnosed with hepatitis. Coinciding with the breakdown of lead vocalist Noddy Holder's marriage, the band agreed to stop touring to allow Holder a break. "I've got to put my priorities in the right order now, I've given the band 20 years of priority and now I can't. I've got to give my kids priority", he told the Slade fanzine Percy in the mid-80s. Meanwhile, the band would continue to record.

Still contracted to RCA, the band set out to record their 12th studio album later in 1984. The success of "Run Runaway" and "My Oh My" led to producer John Punter being hired again to produce most of the album. The lead single "All Join Hands" was released in November 1984 and reached No. 15 in the UK. However, the following single, "7 Year Bitch", was banned by UK broadcasters when it was released in January 1985. The backlash caused the single to stall at No. 60. The third single "Myzsterious Mizster Jones" was released in March and peaked at No. 50. The same month saw the release of Rogues Gallery, which peaked at No. 60 in the UK and No. 132 in the US. In America and certain European territories, "Little Sheila" was released as a single in April. It reached No. 86 on the US Billboard Hot 100 and No. 13 on the Mainstream Rock Chart. The album was a bigger success in a number of European territories.

Speaking to Kerrang! shortly before the album's release, Lea said: "I think this record has a more rounded quality than anything we've done before. For a start, we've actually gone in and demoed the new material before recording properly. The album is still heavy, lots of guitars, five and six minute numbers, but everything sounds much more tuneful, meaning there are lots of potential singles on it. There are no long solos but there are some great guitar parts, hot and fast breaks."

In a 1986 fan club interview, Dave Hill recalled his feelings about the album: "There were very mixed opinions of the last album, from 'I like it' to 'I don't like it' - very, very bizarre. I personally think it lacked something. I mean it was a good sounding LP, but maybe it had a bit too much quality. I think it lacked a certain amount of soul, or maybe guts. It wasn't a particularly enjoyable event for me personally. That wasn't anybody's particular fault in the band, it was just the process of things. Maybe it took too long. Perhaps it should have been much easier. I think that maybe too many of the songs on Rogues Gallery sounded like pop hits, so the album began to lean too much to being regarded as a sort of 'poppy' album, and there is nothing worse than that for me."

Holder also said in 1986: "I'm proud of the songs although I'd admit that the production wasn't all it might have been." Speaking to John Strednansky of Metal Rendezvous in 1987, Holder recalled of Rogues Gallery: "You know, we thought it was a very strong album. We were really pleased with the songs we had written for that record. But, we used far more keyboards on that album. We tried, it was something different for us, but our hardcore fans probably did not take to it as well. That may be the one thing that was wrong with it. Maybe we went too much toward more commercial songs. We didn't do them in the heavy rock vein, but we still thought that it was a very good album!"

Later in a 1990 fan club interview, Holder said of the album's recording process and result: "It became a bit of a saga, it took a lot of time and eventually turned out to be a great album although I feel there was something missing - something that is the Slade trademark was missing."

Recording
The album was recorded at Angel Studios, Portland Studios, RAK Studios and Utopia Studios. It was mixed at Air Studios and The Workhouse. Before the album's release, the album's working title was Partners in Crime and the original sleeve design was conceived with this title.

Release
Slade celebrated the album's release with a party at the Royal Exchange pub in Bilston on 21 March 1985.

In America, the weekly music trade publication R&R reported that Rogues Gallery was the most added AOR album in early April 1985, having been added to fifty-four stations across the country. Rogues Gallery ranked at No. 17 on the Radio & Records National Airplay AOR Albums chart.

Promotion
During Autumn 1984 and the Spring 1985, a full European tour was announced and tickets were put on sale. However, the band had not actually confirmed that they would tour, nor had any contracts been signed. Owing to Holder's existing stance on touring, the tour was soon cancelled. Had the 1985 leg of the tour taken place, Lea was considering adding a keyboard player to Slade's stage show.

Noddy Holder spoke about the tour in a 1986 fan club interview: "Although it was virtually me that cancelled it for the personal reasons - that tour was never confirmed. The agent and promoter started promoting it and selling the tickets, and we hadn't even confirmed that we were going to do the tour. The tickets had already been on sale for two months and nobody bothered to tell us!"

Retrospective reviews
In the September–December 1986 Slade fan club magazine, results of a 1986 opinion poll were published. Fans votes for Slade's best album of the 1980s had placed Rogues Gallery at No. 2.