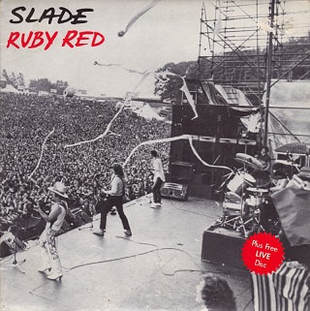 Ruby Red is Slade's third single from their tenth studio album Till Deaf Do Us Part. Released by RCA on 4 March 1982, it reached No. 51 in the UK and remained in the charts for three weeks. The song was written by Noddy Holder and Jim Lea, and produced by Slade.

Background
Following their revival after their performance at the 1980 Reading Festival, Slade signed a deal with RCA Records the following year. In November 1981, the band released the album Till Deaf Do Us Part, which included the UK Top 30 hit "Lock Up Your Daughters". In March 1982, "Ruby Red" would be released as the follow-up single. It reached No. 51 in the UK, lasting on the chart for three weeks.

"Ruby Red" had been written around 1978 but the band felt their original recording of it did not meet their expectations. Shortly prior to the recording sessions for Till Deaf Do Us Part, Holder and Lea further developed the song and the band then recorded it for inclusion on the album. Speaking of the song and its history in a 1981 interview, Holder revealed: "It's a number that we've had around for a long time. Me and Jim wrote it maybe two or three years ago. We tried to record it before but we never managed to get it down how we actually wanted it. Recently, when we were looking through the songs that we'd got for the album, we remembered that we'd never been able to get "Ruby Red" down on tape properly, but that it was a good, strong, commercial sound. So we added some new riffs to it and got it down and it's a good commercial song. It might be in line for the next single."

Release
"Ruby Red" was released on 7" vinyl by RCA in the UK only. The B-side, "Funk Punk & Junk", was exclusive to the single and would later appear on the band's 2007 compilation B-Sides. The first 20,000 copies of the single were released as a double pack edition, containing a free vinyl with two live tracks; "Rock and Roll Preacher" on the A-side and "Take Me Bak 'Ome" on the B-side. In a 1986 fan club poll, Slade fans voted "Ruby Red" as having the best picture sleeve with a Slade single.

Music video
A music video was filmed, but was never shown at the time of single's release. It was directed by Eric Boliski. The video featured the band performing on stage, interspersed with other shots showing a lady portraying "Ruby" in the song. Looking back on the video in 1986, Lea recalled that some footage of a girl running through a forest had also been filmed.