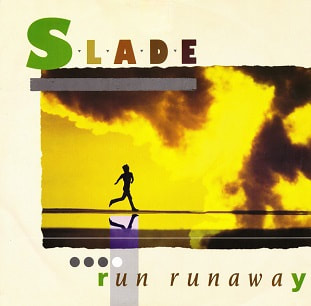 Run Runaway is Slade's third and final single from their eleventh studio album The Amazing Kamikaze Syndrome. Released by RCA on 27 January 1984, it reached No. 7 in the UK and remained in the charts for ten weeks. In March 1984, the song was released by CBS as the first single from the album's US counterpart Keep Your Hands Off My Power Supply. It became the band's first Top 40 hit in America, where it reached No. 20. The song was written by Noddy Holder and Jim Lea, and produced by John Punter.

Background
Although the band recorded much of The Amazing Kamikaze Syndrome in 1982, their label RCA felt the recorded tracks lacked chart potential and in the effort to amend that, RCA suggested the band work with producer John Punter. Holder and Lea then wrote and demoed two songs, "My Oh My" and "Run Runaway", which had been specifically created as potential singles. Both were received with enthusiasm by RCA and Punter was hired to work on the two tracks, with both being recorded in September-October. With the UK/European success of "My Oh My" in late 1983, The Amazing Kamikaze Syndrome was rush-released by RCA in December. In January 1984, "Run Runaway" was released as the album's third single, which reached No. 7 in the UK and was a hit across Europe and beyond too.

The 1983 success of Quiet Riot's version of Slade's 1973 UK chart topper "Cum On Feel the Noize" led to Slade signing with CBS for their first American record deal since the 1970s. The label soon repackaged The Amazing Kamikaze Syndrome into Keep Your Hands Off My Power Supply and released "Run Runaway" as the lead single in March 1984. With surging interest in the band and a music video benefiting from heavy play on MTV, "Run Runaway" was Slade's breakthrough hit in America and would remain the band's biggest success there. It peaked at No. 20 on the Billboard Hot 100 and was also No. 1 on the Billboard Top Tracks Chart.

"Run Runaway", described by Holder as "a rocky Scottish jig", features Lea on electric fiddle. In a 1984 interview with Nick Owen on TVAM, Holder said: "We always wanted to do a jig with the old violin going and that. We decided to go in and put a sort of rock beat behind an old Scottish jig." In a 1986 fan club interview, Lea revealed that he had come up with the song's melody while holding a conversation with someone. Later in 1987, Holder was asked what was his favourite Slade song. He replied that although "Far Far Away" was his favourite, hearing "Run Runaway" on the radio a few days before the interview really knocked him out. In a 1989 interview, Don Powell was asked for what he felt were the band's best efforts on record and he recalled that he enjoyed recording "Run Runaway".

Release
"Run Runaway" was released on 7" and 12" vinyl by RCA Records in the UK, Ireland, across Europe, Australia, New Zealand and Japan. It was released by CBS in America and Canada. The B-side on all RCA versions of the single was "Two Track Stereo, One Track Mind", which was exclusive to the single and would later appear on the band's 2007 compilation B-Sides. On the CBS releases, "Don't Tame a Hurricane" appeared as the B-side, which would be included as an album track on Keep Your Hands Off My Power Supply. The 12" vinyl, released in the UK and Germany, featured an extended version of "Run Runaway" as the A-side.

Music video
A music video was filmed to promote the single, which was directed by Tim Pope for GLO Productions and cost £16,000 to make. It was shot at Eastnor Castle in Ledbury, Herefordshire. In keeping with the song's celtic/jig sound, the video featured the band performing the song in front of an audience dressed in tartan. Other sequences showed a marching bagpipe band and a kilted Scot grappling with a caber.

The video was a big success in America, where it reached the top of the playlist charts. Its constant showing on MTV helped "Run Runaway" become Slade's biggest American hit. Despite its success, the band were disappointed that the video did not feature any direct shots of Powell. In a 1986 interview, Lea said that the band's only requirement in their music videos is that each band member is featured, however in the "Run Runaway" video, Powell is only seen in the background. In a 1986 fan club opinion poll, fans voted the video was the band's best music video.

In 2011, the coat Dave Hill wore in the video sold on eBay for £295. The seller had bought the coat many years ago from the Slade International Fan Club where Hill auctioned off several items to raise money to build a home recording studio.