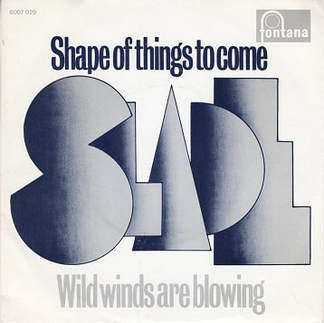 Shape of Things to Come is Slade's first single from their second studio album Play It Loud. Released by Fontana on 6 March 1970, it failed to make an appearance in the UK charts. A cover of the Max Frost and the Troopers song from the 1968 film Wild in the Streets, "Shape of Things to Come" was written by Barry Mann and Cynthia Weil, with Slade's version produced by Chas Chandler.

Background
After their 1969 debut Beginnings failed to break the band, then known as Ambrose Slade, into the UK charts, their new manager Chas Chandler encouraged them to begin writing their own material. He also believed they would benefit from a new look and the band soon adopted a skinhead image. Coinciding with this new image, Ambrose Slade changed their name to "The Slade" and released the failed single "Wild Winds Are Blowing" in October 1969.

The following single was a cover of "Shape of Things to Come", which again failed to chart upon release in March 1970. It was the band's first single as Slade, and its failure resulted in Chandler moving the band from Fontana to Polydor Records, believing a higher profile label would boost sales. The band then began recording material for their second studio album Play It Loud, which would include "Shape of Things to Come" on it.

Speaking to Goodtimes Magazine in 2015, Jim Lea recalled: "We had no hits. Songs such as "Know Who You Are" or "Shape of Things to Come" were played on the radio only very infrequently. Even though we performed "Shape of Things to Come" on Top of the Pops it didn't really help. So we just kept on touring and playing live." Although Play It Loud would prove to be another commercial failure, the band would achieve their commercial breakthrough with their mid-1971 single "Get Down and Get with It".

According to Holder, distribution issues caused the single to fail to chart. Speaking to the Top of the Pops magazine in 1975, he said: "It was bubbling under the fifty five years ago and we went on Top of the Pops with it. It was a good record, and it had all the makings of a hit, and it was selling well. We did a good Top of the Pops and the next week the orders started to flow in. It was all set to be a hit record and they just could not get the records to the shops in time. It just hit them from nowhere, and they weren't ready for it, so they couldn't press the records quickly enough to get them in the shops. So all the orders that the shops had put in weren't ready to go over the counter, and it just fizzled out. After that record, our contract [with Fontana] was just about up, so we moved to Polydor."

Release
"Shape of Things to Come" was released on 7" vinyl by Fontana Records in the UK and the Netherlands only. The B-side, "C'mon, C'mon", was written by Holder and was exclusive to the single and would later appear on the band's 2007 compilation B-Sides.

Following its lack of success, the single was quickly deleted has since become a collector's item. However, the song itself would appear on Play It Loud. In 1972, it was included on the compilation Coz I Luv You, along with 1973's Sladest, giving the song greater recognition during Slade's commercial heyday. In 1991, the single was re-issued as one of twelve discs in the Fontana Singles Box Volume 1 - Hits And Rarities set.

Promotion
To promote the single, the band appeared on the UK show Disco 2 in March. The following month, they made their first appearance on Top of the Pops. While Chandler was successful in getting the band a slot on the show, their Skinhead image had initially caused trouble. Don Powell recalled in his 2013 biography Look Wot I Dun: "The producer's son had been beaten up by skinheads, so they didn't really want us there." In his 1999 biography Who's Crazee Now?, Holder recalled: "Our second TV appearance was on Top of the Pops. It was for "Shape of Things to Come". It wasn't a hit, but in those days you could get on the show as a band with a new release. Elton John was on with us, it was his first time on Top of the Pops too." Both performances have not been seen since their original broadcast and are presumed lost.