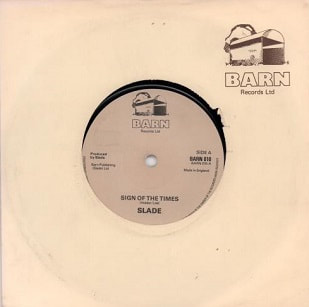 Sign of the Times is Slade's second single from their eighth studio album Return to Base. Released by Barn Records on 26 October 1979, it failed to chart in the UK. The song was written by Noddy Holder and Jim Lea, and produced by Slade.

Background
"Sign of the Times" was released at a time when Slade were experiencing a low wave of popularity and commercial failure. The band were restricted to playing small venues, including universities and clubs, and although they could still draw small crowds, the band's new releases were generally chart failures. In May 1979, "Ginny, Ginny", the first single from the band's upcoming album Return to Base, failed to chart.

Deciding that a second single would be released from the album, the band were initially unsure of which track to release. When rough copies of Return to Base were sent to a number of European record labels, each had different thoughts on what song they believed to be a good contender. "Sign of the Times" was eventually chosen and released in October. However, the single failed to chart. In a 1981 fan club interview, Noddy Holder said: "We released things like "Sign of the Times" as an A-side single but it was withdrawn after only a week as we decided that we didn't want it out as most of the radio stations refused to play it. It only sold a few hundred copies." He also described the song as "acoustic rock".

"Sign of the Times" speaks of the approaching end of the 1970s and the 20th century, including the technological advances seen from the mid 20th century onwards, such as the invention of Supersonic aircraft, the Apollo 11 moon landing, test tube babies and the rising of the computer age. A reference is also made to the fictional character Big Brother of George Orwell's novel Nineteen Eighty-Four. The song was recorded and mixed at Portland Studios.

The title of Return to Base was taken from one of the song's lines. In a 1979 fan club interview, Hill explained: "We had a whole list of suggestions for the title, and Return to Base is the one we eventually decided upon." When asked why the song hadn't been included on the band's October tour, Hill revealed: "The reason for that is that at the moment we feel the act is just about right. We have added two numbers that have worked very well, and we are now hoping to get "Sign of the Times" in on the next stretch of dates. Also at the moment we've got one slow ballad in the act, and on this tour we didn't want to have two."

Release
"Sign of the Times" was released on 7" vinyl by Barn in the UK only. It was marketed and distributed by Pinnacle, and released in a generic Barn sleeve. The B-side, "Not Tonight Josephine" was originally exclusive to the single, but would re-appear as the B-side to the band's 1981 single "Wheels Ain't Coming Down". It was later included on the band's 2007 compilation B-Sides. "Sign of the Times" was one of the last singles to be released on the Barn label, which was discontinued in 1980. "Sign of the Times" later re-appeared as the B-side to the band's 1981 UK hit single "Lock Up Your Daughters". The song was included on Salvo's 2006 box-set The Slade Box, as well as the 2007 remaster of We'll Bring the House Down.