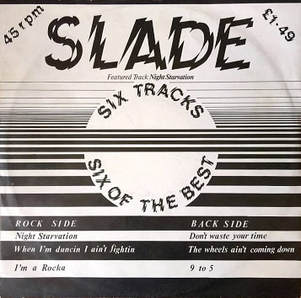 Six of the Best is Slade's first extended play, released on the Six of the Best label on 24 May 1980. The EP features six tracks; three new tracks and three taken from the band's 1979 studio album Return to Base. Featuring "Night Starvation" as the lead track, the EP failed to make an appearance in the UK charts. All tracks were written by Noddy Holder and Jim Lea, except "I'm a Rocker" by Chuck Berry. The EP was produced by Slade.

Background
After the commercial failure of the band's 1979 album Return to Base, the band's next release would be Six of the Best in May 1980. To promote the release, a promotional-only single, "Night Starvation", was released in June to try and gain radio airplay, followed by another, "Nine to Five". Despite having the low selling price of £1.49, the EP failed to chart, with both promotional singles failing to generate sufficient airplay. In Belgium, the EP reached No. 3 on the Telemoustique Chart; a weekly rock chart compiled by public votes.

The lack of success in the UK continued the band's struggles. In June, the band embarked on a UK tour to promote the EP, but by July were on the verge of disbanding. The band's fortunes changed after they were offered a headlining slot at the Reading festival in August 1980, following a late cancellation by Ozzy Osbourne. The band's performance in front of the 65,000-strong crowd saw Slade back in the public eye. The music press began to take an interest in the band again, while heavy metal followers also began deeming the band 'cool'.

Six of the Best was released on 12" vinyl in the UK only on manager Chas Chandler's label Six of the Best, a reworking of his Barn Records, which was by then largely defunct. The manufacturing and distribution was handled by RCA. The A-side was named the "Rock Side", while the B-side was named the "Back Side". The EP featured three new songs; "Night Starvation", "When I'm Dancin' I Ain't Fightin'" and "9 to 5". The other three tracks, "I'm A Rocka", "Don't Waste Your Time" and "The Wheels Ain't Coming Down", were taken from Return to Base and were remixed for inclusion on the EP. Lea designed the EP's sleeve.

In a 1980 fan club interview, Holder spoke of the EP and the band's struggles at that time: "After Return to Base, there was a period of us writing songs and seeing how they turned out. Like "When I'm Dancin' I Ain't Fightin'" and "9 to 5" - to us they were all good songs - but they didn't sell huge quantities of records. Therefore, we got to a point where we thought that we'd cool it for a little while and not go in the studio. Jim was working on his band The Dummies - so me and Jim decided to write a song specifically for them. The final record got lots of radio play. So we knew that we could still write songs that would get played on the radio. Then it was a case of thinking "where do Slade go from here?" We now knew that our songs were strong. Then the Reading Festival came along. You've seen the reaction on "When I'm Dancin' I Ain't Fightin'" now - when we first brought the track out on the Six of the Best EP, it didn't see the light of day as far as charts were concerned - but now it's on the Reading EP and all the crowds are singing it!"