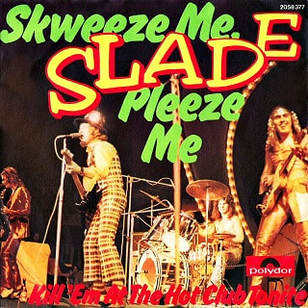 Skweeze Me, Pleeze Me is a non-album single, released by Polydor on 22 June 1973. It reached No. 1 in the UK, giving the band their fifth number one single, and remained in the charts for ten weeks. The song received a Silver certification by BPI in July 1973. In the United States, it was released in September 1973 by Reprise Records. The song was written by Noddy Holder and Jim Lea, and produced by Chas Chandler.

Lea originally got the idea for the chorus of "Skweeze Me, Pleeze Me" at the band's regular pub, The Trumpet in Bilston, after listening to local pianist Reg Kierle performing there. The song had the working title of "You Know How to Squeeze Me". During the release of the song, Don Powell was involved in a near-fatal car crash in July, briefly throwing the band's existence into doubt. Despite his critical condition, Powell was able to make a recovery and the band soon entered the studio to record material for their next album Old New Borrowed and Blue.

Release
"Skweeze Me, Pleeze Me" was released on 7" vinyl by Polydor Records in the UK, Ireland, across Europe, Scandinavia, Australia, New Zealand, South Africa, Israel, Argentina and Japan. In America, it was released by Reprise Records. The B-side, "Kill 'Em at the Hot Club Tonite", was exclusive to the single and would later appear on the band's 2007 compilation B-Sides. The band had briefly considered releasing the B-Side as a novelty single, however Powell's car crash caused the idea to be scrapped. In America, the B-side was the Old New Borrowed and Blue album track "My Town". For release as a single, the full-length version of the song was edited down. For the American release, the song was edited down even further, with a length of just under three minutes.

Promotion
Due to Powell's car crash, no music video was filmed to promote the single. The band appeared twice on the UK music show Top of the Pops prior to Powell's crash. Afterwards, the producers of the show would not allow Slade to perform as a three-piece band. Instead, a video of a studio audience dancing to the song was broadcast. Prior to Powell's crash, the band also performed the song, along with its B-Side, on the UK TV show Lift off with Ayesha. The performance has not been seen since its original broadcast. Footage of the band performing the song at their Earls Court concert in London, has surfaced. The sold-out show took place three days before Powell's crash.