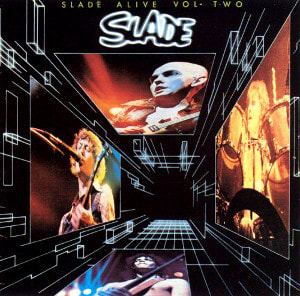 Slade Alive, Vol. 2 is Slade's second live album, released by Barn Records on 27 October 1978 and produced by Chas Chandler. It failed to chart. Titled as the follow-up to the band's commercially and critically successful 1972 album Slade Alive!, the performances on Slade Alive, Vol. 2 were taken from the band's Autumn 1976 tour of the United States and their Spring 1977 UK tour.

Background
Having returned from the US in late 1976, Slade found the UK music business much changed from when they had left in 1975 to try and crack the American market. Punk rock had become the dominant influence on youth culture and the music press. Despite Slade's reputation as a song live act, the band's new releases were not commercially successful. Regardless, Slade were determined that they were now a better live act than ever and refused to call it a day.

Their 1977 album Whatever Happened to Slade was a commercial failure and on their UK Spring tour, the band found they could no longer fill large venues. The following year saw the band continue to suffer commercially with their new records all failing to chart. With the band's new output no longer being released on Polydor Records but instead on manager Chas Chandler's label Barn records, singles such as "Burning in the Heat of Love", "Give Us a Goal" and "Rock 'n' Roll Bolero" were all chart failures. In the hope their live reputation would result in some chart action when released on record, the band released Slade Alive, Vol. 2 in October 1978. However, it too was a commercial failure and Slade would only regain popularity after performing at the Reading Festival in 1980.