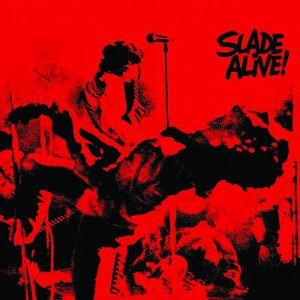 Slade Alive! contains three original songs, plus cover versions of songs by Ten Years After, The Lovin' Spoonful, Bobby Marchan, and Steppenwolf. It was recorded live at Command Theatre Studio and mixed at Olympic Studios. Today, the album has been considered as one of the greatest live albums of all time. Kiss, who were heavily influenced by Slade, would title their 1975 live album Alive! as a homage to Slade Alive!.

Background
Having made their UK breakthrough with the successful singles "Get Down and Get With It", "Coz I Luv You" and "Look Wot You Dun", Slade decided that the best way to break into the album charts would be to capture their live sound on record. Shortly prior to the album's recording, Hill said: "If this live album works then it will set a pattern for us and we'll probably repeat it. We're trying to discover something for ourselves. We want to find out what is right for us as a group. We'll soon know." He told Record Mirror: "Fans come up and ask if we have an album out and it's a bit sad that there is only Play It Loud because it is so dated. We should have recorded a live album ages ago."

In October 1971, the band played three consecutive nights at London's Command Theatre Studio in front of a studio audience. The three nights cost £600 to record, with the band using most of their recorded performance from the second night. Initially Chas Chandler rejected Command Studio's mix of the album, which was completed in conjunction with the band themselves. He then proceeded to remix the tapes himself, but the band then rejected that mix and went back to their own original mix.

Prior to the album's release, "Hear Me Calling" was released as a promotional single in February 1972, with "Get Down With It" as the B-Side. The release was limited to 500 copies. Slade Alive! was then released without overdubs in March 1972. It was a big success in the UK where it would reach No. 2. In Australia, where it reached No. 1, it was the biggest selling album since The Beatles' 1967 album Sgt. Pepper's Lonely Hearts Club Band.

Release
In its original LP vinyl format, the album was issued in a gatefold sleeve which revealed a huge cartoon drawing on the inside. This drawing was the winning entry in a competition run in The Sun newspaper to design the album cover. In Israel and Italy, the front cover used the inner gatefold artwork instead, whilst certain editions releases in the Netherlands and France also used this design.

In 1978, the album was given a German release as a double-pack LP with a gatefold sleeve, paired with the Slade Alive, Vol. 2. It received its first CD release in 1991, which was digitally remastered by Lea. In 2006, it was included as part of the Salvo two-disc live compilation Slade Alive! – The Live Anthology. Salvo re-issued it on vinyl in 2009 and on CD in 2011. In 2017, BMG released a deluxe edition to celebrate its 45th anniversary. It was issued on vinyl with a 6 page insert and art card, and on CD with a 28 page booklet.

Promotion
As a major part of promotion for the album, the band embarked on a UK tour during April and May. The poster for this tour used the same artwork as the album, both front and back sides. On the UK Granada Television, the band performed a 'Set of Six' show on 13 June 1972. This filmed set featured a similar set to Slade Alive!, the tracks in order being "Hear Me Calling", "Look Wot You Dun", "Darling Be Home Soon", "Coz I Luv You", "Get Down and Get With It" and "Born to Be Wild".

Speaking of the album's commercial success prior to their UK tour, Hill told Pamela Holman of Record Mirror in 1972: "We were amazed that it got in [the charts] so quickly. The real promotion on the album hasn't even got going yet. This tour we start on May 10 is the main promotion because the album is live and we sell it on our stage show."