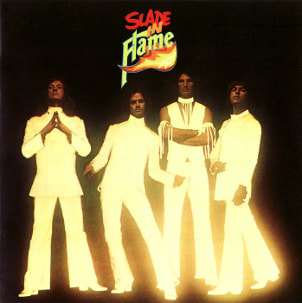 Slade in Flame is Slade's first soundtrack album and fifth studio album, released by Polydor on 29 November 1974 . It reached No. 6 in the UK and was certified Gold by BPI in February 1975. Produced by Chas Chandler, the album contains songs featured in the band's film of the same name. The band tried to give the album a "sixties" feel, as the film was set in the late 1960s.

In the US, the album was released on the Warner Bros. label, with "The Bangin' Man" replacing "Summer Song (Wishing You Were Here)" & "Thanks for the Memory" replacing "Heaven Knows".

Background
By 1974, Slade had become a big success in the UK, Europe and beyond; however the band felt that continuing to provide 'more of the same' was not what they wanted to do. The band's manager Chas Chandler suggested Slade do a movie, to which the band agreed. Rather than producing a film portraying the band's "happy-go-lucky" image, the subject matter was based on the gritty tale of the rise and fall of a fictional 1960s group called Flame. The script, written by Andrew Birkin and Dave Humphries, was largely based on true music business events that had occurred to Slade and other groups of the time.

To accompany the film, Noddy Holder and Jim Lea began writing material for a soundtrack album, which would continue to see the band break out of their successful formula and try different musical ideas. Holder told Disc in 1974, shortly prior to the album's release: "We put in a lot of hard work on this film. Jimmy and I wrote most of the songs for it while we were on the last [American] tour, and concentrated on writing really good songs."

Having completed their fifth US tour, the band then recorded the new album. Powell told Bill Henderson of Sounds: "We knew the basic storyline of the film so Nod and Jim wrote the songs to fit. We didn't have any free time so they had to write it on our last American tour and then we rehearsed them as we went along - getting to the halls earlier and in hotel rooms and things. Then we spent like two weeks solid in the studio putting it together." Once recording was finished, the album was mixed by Chandler in New York.

In October 1974, the lead single "Far Far Away" was released and reached No. 2 in the UK. The Slade in Flame album followed in November, peaking at No. 6. Though the record was lauded by critics, the album did not sell as well as expected, particularly as the band's previous three albums had all reached number one.

In January 1975, the Slade in Flame film was released. Although it later received recognition as one of the greatest rock films, the initial reception towards the film was less positive, particularly from fans. Slade's audience did not expect the band to produce a film with a bleak and sour atmosphere. In February 1975, the second and final single, "How Does It Feel", was released and reached No. 15 in the UK, breaking a run of twelve Top 5 UK hits.

Speaking of the album to Colin Irwin of Melody Maker in 1974, Hill said: "We feel that with the new album we've certainly moved. The new album is a move-on, it's a lot of new music. People go on about formulas for records and all that, but I'd like to put all our records together and see how much they differ. To me they do and the new album is definitely a new stage. We've got some saxes and some heavy stuff on it, and a theme tune which is very different for Slade."

Recording
Speaking of the use of brass on some of the album's tracks, Powell commented to Sounds in 1974: "It's the first time we ever used anything outside the group before. It was really strange having other guys in the studio and then listening back to it afterwards. We sound like a real group! We used the brass to augment a few things. And Nod and Jim's writing is getting a lot better, trying to be a bit more experimental now."

Release
The album was originally scheduled for release on 22 November 1974 but Polydor were unable to produce enough copies to cover pre-order sales. Prior to its release, the album was awarded a Gold Disc based on pre-order sales. Disc reported in January 1975 that the album had sold over 170,000 copies and in February 1975, it had surpassed 200,000 sales in the UK.