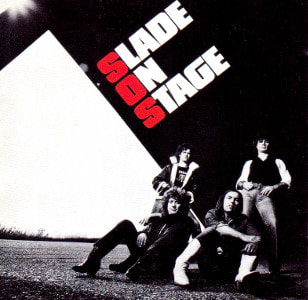 Slade on Stage is Slade's third live album, released by RCA on 11 December 1982 and produced by Slade. The album reached No. 58 in the UK, remaining in the charts for three weeks. It was recorded at Newcastle City Hall on 18 December 1981.

Background
Following Slade's performance at the Reading festival in 1980, interest in the band was revived and a major record deal with RCA signed. During the tour to promote the band's 1981 album Til Deaf Do Us Part, the band decided to record their concert at Newcastle City Hall on the RAK mobile. Produced and mixed at Portland Studios in London, Slade on Stage was released in December 1982 and reached No. 58 in the UK.

Speaking to Kerrang! in 1982, Holder said of the album: "I think we've managed to keep the excitement of the gig virtually intact. It's true we had to do a few studio bits to tart it up, but these have been kept to a minimum. You've always got to remember that somebody is gonna pay hard earned cash for this record. And, whilst every effort should be made to preserve the atmosphere of a thing, if adding a few touches to it can enhance the final sound, then I think you owe it to the punter to do just that. With Slade on Stage, though, all we've done is to make up for bits where, for example, a guitar string broke or something. Oh yeah, and we had to cut out part of the audience as well, 'cos one of the microphones in the auditorium was set up next to a loony. He kept on shouting into it "bastard!" at the top of his voice, so obviously that had to go. But, apart from those things, everything is faithful to the show."

The album sleeve's photographs were shot by Gered Mankowitz on a section of the M25 motorway prior to its opening. The photograph on the front sleeve was taken underneath a bridge and the back photograph taken on the bridge.