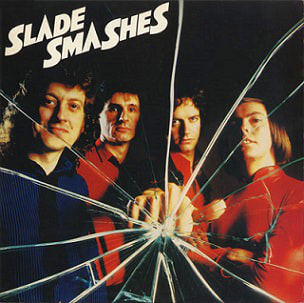 Slade Smashes! is a compilation album, released by Polydor on 1 November 1980 . It reached No. 21 in the UK, remaining on the charts for 15 weeks. The album was released in the wake of new interest in the band following their successful appearance at the 1980 Reading Festival, filling in for Ozzy Osbourne. The album featured most of the band's big hits from their early and mid 1970s heyday in the UK as well as three of the band's singles from post-1977. This collection, alongside the band's subsequent 1981 studio release We'll Bring the House Down, further cemented Slade's comeback in the UK and Europe.

Background
The compilation was compiled by Polydor and has little input from the band. According to the Slade fan club, Polydor spent £250,000 on promotion of Slade Smashes!. The album was a success in the UK, reaching No. 21 and gaining a Gold certification in December for selling 200,000 copies.

In a 1980 fan club interview, Noddy Holder commented of the compilation's release: "It's not been the Reading Festival that has prompted the release of the album – they had already made plans to release the album before we decided to do the show. In a 1980 interview with Sounds, Holder further added: "This compilation will be great for the fans, a chance to get all the hits on one record. But we don't relate to them in the same way any more, the way we play them now is bugger all like the records anyway." Prior to the release of the album, all of the band's singles had been deleted except "Merry Xmas Everybody".

In December 1984, Dave Hill sold his own Slade Smashes! UK Gold Disc award for charity. It sold for £385 and was shown on the UK television show Saturday Starship.