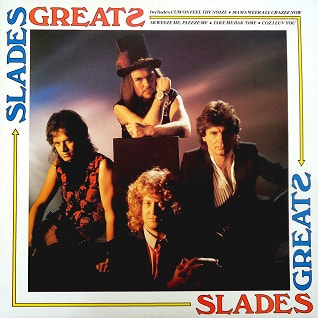 Slades Greats is a compilation album, released by Polydor on 12 May 1984. The compilation, a revised re-issue of the 1980 compilation Slade Smashes!, was released following the band's late 1983-early 1984 success with the singles "My Oh My" and "Run Runaway". It reached No. 89 in the UK charts.

Slades Greats contains sixteen tracks, all of which were hit singles from the 1970s. The track-listing is the same as on Slade Smashes! but with the exclusion of four songs; "Gypsy Roadhog", "In for a Penny", "Give Us a Goal" and "My Baby Left Me/That's Alright Mama".

Background
In November 1980, the band's former label Polydor released Slade Smashes in the wake of new interest in the band following their performance at the 1980 Reading Festival. The album was a success in the UK, reaching No. 21 and gaining a Gold certification in December for selling 200,000 copies. Later in December 1983, the band reached No. 2 with their single "My Oh My" and No. 7 with "Run Runaway" in February 1984. The success of these two singles prompted Polydor to re-issue a revised version of Slade Smashes!, re-titled Slades Greats. Released in May 1984, the compilation, issued on vinyl and cassette, was released in the UK, across Europe and beyond, including New Zealand, Mexico and Canada. Music Week anticipated the compilation would reach the top 20 in the UK Albums Chart, but it climbed no higher than No. 89.