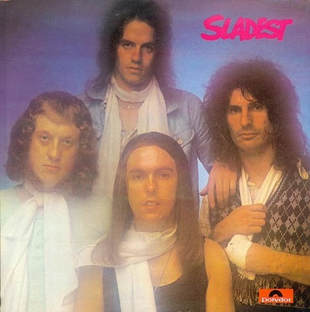 Sladest is a compilation album, released by Polydor on 28 September 1973. It reached No. 1 in the UK, remaining on the charts for 24 weeks. Following a Silver certification from BPI during the month of release, Sladest went Gold in November. In America, Sladest was released by Reprise and featured a significantly different track listing. It reached No. 129 on the Billboard 200.

Background
In 1973, Slade were one of the most popular bands in Britain, having achieved two number one singles - "Cum On Feel the Noize" and "Skweeze Me, Pleeze Me" - in three months. Both had entered the charts straight at number one, which was a rare feat at the time and had not been achieved since The Beatles with "Get Back" in 1969. However, soon after the release of "Skweeze Me, Pleeze Me", drummer Don Powell was involved in a near fatal car crash in July 1973. The accident threw the band's future into doubt and despite his critical condition, Powell was able to make a recovery.

While recording their next studio album, Old New Borrowed and Blue, Slade decided to release a compilation album to maintain the band's momentum. Sladest was released in September 1973, on the same day as the band's new single "My Friend Stan". Sladest topped the UK charts and was a success in Europe and beyond too. In its first week of release, it was awarded a UK Silver Disc and in November, it received a UK Gold Disc and was set to surpass 200,000 sales at the time. Having remained at No. 1 for its first three weeks of release, Sladest later returned to the top spot in mid-January 1974, following the success of "Merry Xmas Everybody".

Release
Sladest was originally going to be titled "The Best of Slade". It contained fourteen tracks and included the band's eight hit singles up to that time, along with six other tracks, five of which pre-dated Slade's commercial breakthrough in 1971. In America, the album was released by Reprise (Warner Bros. Records), and was the band's first release on the label. The release featured ten tracks, including the band's eight hit singles, along with "My Friend Stan" and its B-Side "My Town".

Sladest was first released on CD in Japan in 1988. A UK and European CD release followed in 1993. In 2011, the album was remastered and re-issued on CD by Salvo. It included four extra tracks, one of which was a previously unreleased studio version of "Hear Me Calling".