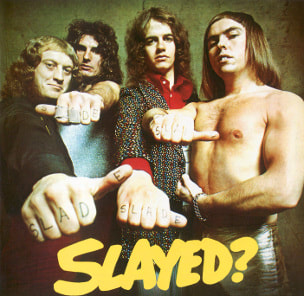 Slayed? is Slade's third studio album, released by Polydor on 1 November 1972 and produced by Chas Chandler. It reached No. 1 in the UK and remained on the chart for 34 weeks, being certified Silver in early 1973. The album was also the band's most successful of the 1970s in the US, peaking at No. 69 and remaining in the charts for 26 weeks. In Australia, the album reached No. 1 and went Gold, knocking the band's live album Slade Alive! to No. 2.

Background
After achieving their breakthrough hit with "Get Down and Get With It" in 1971, Slade would continue to achieve further success with their follow-up singles "Coz I Luv You", "Look Wot You Dun" and "Take Me Bak 'Ome". The 1972 live album Slade Alive! also gave the band their first success on the albums chart, reaching No. 2. Having achieved their second UK number one with "Take Me Bak 'Ome", the band soon finished recording their next studio album Slayed?. In August 1972, the lead single "Mama Weer All Crazee Now" was released and was another UK chart topper. Slayed? followed in November and reached No. 1. A second single, "Gudbuy T'Jane", was also released that month and reached No. 2 in the UK.

In an interview shortly prior to the album's release, Powell told Elizabeth Walker: "You can rest assured that it's going to rock. With Slade Alive! we got into a particular channel and it's not the time to start changing." Considering all songs on the album to be potential singles, Powell said: "If you think a song is just going to be an album track, you psychologically don't work on it. We treat every song individually."

Speaking to Robert Brinton of Disc, Lea said of the album: "Nearly all the new numbers were written on the road, in cars, on planes - everywhere you can think of. Doing things on little scraps of paper here and there." Holder commented: "There's a lot of different type of songs on it, there's a few rockers like we could do on stage. We don't plan on using all the material for stage work, because when we go to places people want to hear our hits. Personally I think there's a lot of scope on the album, everything is very commercial. Everybody can identify with the lyrics on some of the songs and then on some of the others the lyrics deal with things from the band's point of view."

Critical reception
Contemporary reviews
Retrospective reviews
In the September–December 1986 Slade fan club magazine, results of a 1986 opinion poll were published. Fans votes for Slade's best album of the 1970s had placed Slayed? at No. 3.