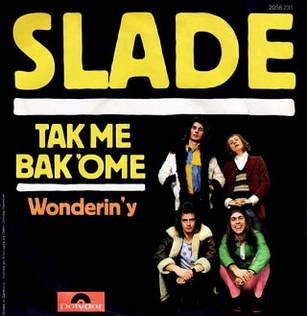 Take Me Bak 'Ome is a non-album single, released by Polydor on 26 May 1972. It reached No. 1 in the UK, giving the band their second number one single, and remained in the charts for thirteen weeks. The song received a Silver certification by BPI that year. In the United States, the song reached No. 97. The song was written by Noddy Holder and Jim Lea, and produced by Chas Chandler.

Background
After achieving their breakthrough hit with "Get Down and Get with It" in 1971, Slade would continue to achieve further success with their follow-up singles "Coz I Luv You" and "Look Wot You Dun", with the former song earning the band their first UK number one. The 1972 live album Slade Alive! also gave the band their first success on the albums chart, reaching No. 2. During 1972, the band recorded their next single "Take Me Bak' Ome". Released in May, the single reached No. 1 in the UK and was a hit across Europe and beyond. In the United States, the song was the band's chart debut on the Billboard Hot 100, where it reached No. 97.

Over a week after the release of the single, Slade appeared at the Great Western Festival near Lincoln on 28 May. Before their performance, the band had fears over whether or not they could win over the 50,000-strong crowd. Now deemed a 'pop band' rather than a credible live act, John Peel's announcement of Slade's imminent appearance on the stage was met with outbreaks of booing from the audience. However, the band triumphed at the festival with their fifty-minute performance. The band's live reputation was enhanced, the music press praised the performance and "Take Me Bak 'Ome" began climbing the charts, reaching No. 1 at the beginning of July.

"Take Me Bak 'Ome" was the next single after "Coz I Luv You" to be written by the band's successful Holder/Lea songwriting partnership. In the band's 1984 biography Feel the Noize!, Lea recalled: ""Take Me Bak 'Ome" was an old song I'd had kicking around for ages. I re-vamped it a bit and nicked a phrase or two from The Beatles' "Everybody's Got Something to Hide Except Me and My Monkey". Nobody ever noticed." During the recording of the song, Holder ab-libbed over the riff in the middle of the song. Lea suggested he change the ab-libs after the original one gave him the idea for the band's next single "Mama Weer All Crazee Now".

In a 1972 interview with Sounds, Dave Hill said: ""Coz I Luv You" was a different kind of song, I thought that was the perfect simple song that made number one so easy, you know? "Look Wot You Dun" was a classic kind of song, with a clean, classy arrangement to it, but then "Take Me Back 'Ome" was a live, earth-dirt song - I felt much more out of that than I did from all the rest, it projected more, and it wasn't just a hit record. I didn't know if that kind of song could make it, and it was great having a thick, dirty song up at number one." Hill told Pamela Holman of Record Mirror in 1972: "We all think it's the best [single] we've done and feel it really represents what we're doing now."

Release
"Take Me Bak 'Ome" was released on 7" vinyl by Polydor Records in the UK, Ireland, across Europe, Scandinavia, Turkey, America, South Africa, Australia, New Zealand, Mexico, Israel, Lebanon, Singapore and Japan. The B-side, "Wonderin' Y", was exclusive to the single and would appear on the band's 2007 compilation B-Sides.

Promotion
No music video was filmed to promote the single. In the UK, the band performed the song on the music show Top of the Pops and 2Gs and the Pop People. In 1973, the song was performed on the Dutch show Popgala.