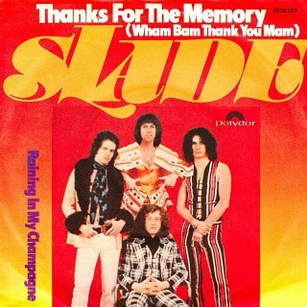 Thanks for the Memory (Wham Bam Thank You Mam) is a non-album single, released by Polydor on 9 May 1975. It reached No. 7 in the UK and remained in the charts for seven weeks. The song was written by Noddy Holder and Jim Lea, and produced by Chas Chandler.

Background
In 1975, Slade's increasing height of success since their 1971 breakthrough began to dwindle. In January of that year, they released their film Slade in Flame. Although it later received recognition as one of the greatest rock films of all time, the initial reception towards the film was less positive, particularly from fans who did not expect the film to have such a bleak and sour atmosphere. In February, the film's theme tune, "How Does It Feel", was released as a single, which reached No. 15 in the UK, breaking the band's run of twelve Top 5 hits.

In May, the band released their new single "Thanks for the Memory (Wham Bam Thank You Mam)". Faring better than the previous single, it reached No. 7 and would be the band's last Top 10 single until 1981's "We'll Bring the House Down". In the first two weeks of release, the single had sold 200,000 copies. Speaking to Top of the Pops soon after the song's release, Holder said: "Although we feel it's one of our best, we've been amazed at the response it's received." After its release, the band would decide to move to America and try and make a commercial breakthrough there.

Described by Holder as being "all keyboards, boogie keyboards", "Thanks for the Memory" is notable for its use of keyboard, which, at the time, was new to a Slade single. The part was played on the recording by Lea, but the band had initially planned to use a session keyboardist. As Lea felt the part was quite complex, the band auditioned many different session players. However, the band felt that none of them could play it right so Lea ended up playing it himself. The song was originally titled "Here's To Your Health, Here's To Your Wealth". The band would later rework this original chorus idea into their 1984 song "Here's To...", which appeared as the B-Side to the hit single "All Join Hands". In a 1976 interview with Capital Radio, Holder cited the song as one of his favourites. Shortly after its release, Led Zeppelin drummer John Bonham told Lea he liked the song and would loved to have played on it.

Release
"Thanks for the Memory" was released on 7" vinyl by Polydor Records in the UK, Ireland, across Europe, Scandinavia, Yugoslavia, South Africa, Australia, New Zealand and Japan. The B-side, "Raining in My Champagne", was exclusive to the single and would later appear on the band's 2007 compilation B-Sides. Although the song was a non-album single elsewhere, it was included on the United States Warner Bros. Records release of Slade in Flame in 1975.

Promotion
In the UK, the band performed the song on the music show Top of the Pops and the children's show Shang-a-Lang. Upon release, the BBC took offence to the line "Have a love smell on your sheet". To allow the band to perform the song on Top of the Pops, Holder had to re-record the line, changing the lyrics to "Have some honey with your meat".

Music video
A music video was filmed to promote the single, which was directed by either Gavrik Lasey or Richard Loncraine. The video featured the band performing the song with Holder wearing a red and yellow-spotted jacket and large kipper tie, with Dave Hill in black studded cowboy-type gear.