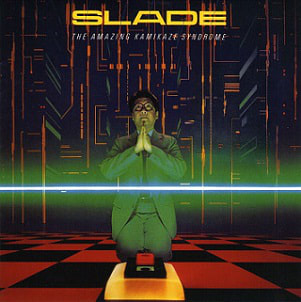 The Amazing Kamikaze Syndrome is Slade's eleventh studio album, released by RCA on 3 December 1983. It reached No. 49 in the UK charts. The album was produced largely by Jim Lea, except the album's two UK Top 10 singles, "My Oh My" and "Run Runaway", which were produced by John Punter.

In 1984, the album was re-packaged and released as Keep Your Hands Off My Power Supply in the United States and Canada. Both "Run Runaway" and "My Oh My" were US Top 40 hits that year, giving the band their long-awaited breakthrough there.

Background
Following Slade's performance at the Reading festival in 1980, interest in the band was revived and a major record deal with RCA signed. The Amazing Kamikaze Syndrome was the band's second studio album for the label and had mostly been recorded in 1982. In November that year, the album's first single, "(And Now the Waltz) C'est La Vie", was released and reached No. 50 in the UK. However, in early 1983, RCA felt the recorded tracks for the album lacked potential chart hits and in the effort to amend that, RCA suggested the band work with producer John Punter. Noddy Holder and Lea then wrote and demoed two songs; "My Oh My" and "Run Runaway". Both were received with enthusiasm by RCA and Punter was hired to work on the two tracks.

Released in November 1983, "My Oh My" became a UK No. 2 hit over the Christmas period, kept from the top spot by The Flying Pickets' cover of "Only You". The success of the single led to RCA rush-releasing The Amazing Kamikaze Syndrome in December, rather than February 1984 as intended. The album reached No. 49 in the UK and was a success across Europe. In January 1984, the second single "Run Runaway" reached No. 7. The success of Quiet Riot's version of "Cum On Feel the Noize" in late 1983 led to Slade signing with CBS, who would repackage The Amazing Kamikaze Syndrome into Keep Your Hands Off My Power Supply in 1984.

The album's title was suggested by Holder. In a 1983 interview, he revealed: "I was reading the sports pages one day and there was an article on motor sport. It talked about the 'kamikaze complex' those guys who compete seem to have in putting their life on the line every time they go on the track. I think Barry Sheene was mentioned as a specific example. Anyway, it struck me that some of our songs fitted in with this idea, so the title seemed a logical choice. And let's face it, everyone has something of that complex in 'em, we all take gambles at some point in our lives."

Speaking to Melody Maker in late 1983, Holder said: "The whole album's very rocky though some of the tracks are more intricate than we've ever done before." Lea told Record Mirror: "Our album is inspired by people doing dangerous exploits, Barry Sheene and sportsmen who live close to the edge."

Release
In a 1986 fan club interview, Holder spoke of the band's wish that a follow-up single from the album had been released following "Run Runaway". He said: "We all felt that there should have been a single out on the back of "Run Runaway". The album was our first big success in America, it was Top 5 all over Europe and Number 1 in Scandinavia for months. Britain was the only place it wasn't a big album. We could have, theoretically, had another single off it. It would have been a hit. There was plenty of good stuff on that album."

Promotion
During the album's release in December, the band had already embarked on a UK college tour. With the success of "My Oh My", the band were also appearing on UK and European TV regularly, followed by the success of "Run Runaway". As the album was originally to be released in February 1984, plans for a major concert tour had been discussed. However, the tour never took place and after a few concerts in America during 1984, the band would never perform live again, except for a one song performance at the band's 25th Anniversary party, organised by the fan club.

Critical reception
Contemporary reviews
Retrospective reviews
In the September–December 1986 Slade fan club magazine, results of a 1986 opinion poll were published. Fans votes for Slade's best album of the 1980s had placed The Amazing Kamikaze Syndrome at No. 1.