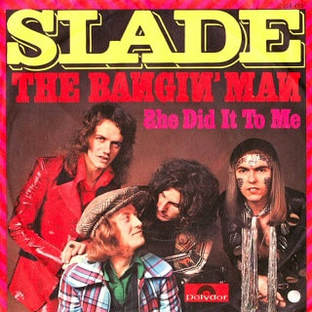 The Bangin' Man is a non-album single, released by Polydor on 28 June 1974. It reached No. 3 in the UK and remained in the charts for seven weeks. That year it received a Silver certification from BPI. The song was written by Noddy Holder and Jim Lea, and produced by Chas Chandler.

Background
After the release of the ballad "Everyday" as a single in March 1974, the band soon returned to the studio to record a follow-up. Opting for a more rock-based sound, "The Bangin' Man" was announced as the band's new single in May 1974 and was released in June. It reached No. 3 in the UK, giving the band their twelfth UK hit.

"The Bangin' Man" was written while the band were touring Australia. Although some fans believe the song's titular character to refer to Don Powell, the song actually refers to Slade's tour manager Graham "Swinn" Swinnerton. Swinn had the job of waking each band member up in their hotel rooms, ready to head on to the next destination on their tours.

Release
"The Bangin' Man" was released on 7" vinyl by Polydor Records in the UK, Ireland, across Europe, Scandinavia, Yugoslavia, America, Australia, New Zealand and Japan. The B-side, "She Did It to Me", was exclusive to the single and would later appear on the band's 2007 compilation B-Sides. Although the song was a non-album single elsewhere, "The Bangin' Man" was included on the United States Warner Bros. Records release of Slade in Flame in 1975.

Promotion
No music video was filmed to promote the single as the band were busy on a world tour. The band performed the song on the UK ITV show Supersonic and the German TV show Disco. The band also performed the song on the Dutch AVRO TV show TopPop. The song was not performed on the UK music show Top of the Pops due to a BBC strike. It was believed that the song suffered chart-wise due to its lack of coverage on the show.