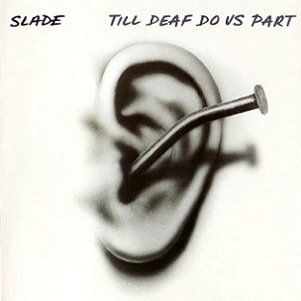 Till Deaf Do Us Part is Slade's tenth studio album, released by RCA on 13 November 1981 and produced by Slade. It reached No. 68 in the UK charts. Although not as successful as We'll Bring the House Down earlier in the year, this album spawned the UK Top 30 hit "Lock Up Your Daughters", which became a staple at Slade concerts.

In 1993, a re-issue of the album on CD by Castle Communications replaced the original artwork with a new design featuring a group photo.

Background
Following Slade's performance at the Reading festival in 1980, interest in the band was revived and the band were now able to fill concert halls once again. The band's 1981 album We'll Bring the House Down was also a success, reaching No. 25 in the UK, while the title track entered the UK Top 10. During the same year, the band continued their resurgence with the recording of Till Deaf Do Us Part. In May 1981, the band released the lead single "Knuckle Sandwich Nancy", however it failed to chart. The band had been confident that the up-tempo record was well-suited as a follow-up to "We'll Bring the House Down", but the band's manager Chas Chandler disagreed. The single was half-heartedly released on the Cheapskate label, with RCA handling marketing and distribution.

The band blamed Chandler for the single's failure and decided to manage themselves from then on, ending a twelve-year partnership. However, this did not stop Chandler from negotiating a major record deal with RCA for them. In September, RCA released the second single from the upcoming album, "Lock Up Your Daughters". It reached No. 29 in the UK. In December, Till Deaf Do Us Part was released as the band's RCA debut and first album of all new material since 1979's Return to Base. It reached No. 68 and a few of the album's songs quickly became part of Slade's live set, including "Rock and Roll Preacher" which became the band's new opener. In March 1982, "Ruby Red" was released as the third single, reaching No. 51 in the UK, while in April, "Rock and Roll Preacher (Hallelujah I'm on Fire)" was released in Germany, peaking at No. 49.

Shortly prior to the album's release, Dave Hill described the album to Sounds: "This album is a thumper and we want it loud. That's the direction we are heading for, like having a live show in the studio almost. It's got guts and melody. That is us really." In a 1981 fan club interview, Holder spoke of the album's title and general theme: "It came about because everyone always says how loud we are. We based the album around volume, all the tracks are rock and it is a loud album. The track "Till Deaf Do Us Part" is all about bending your ear and being deafened. We've used a lot of organ on the album. That's basically the only difference. We think that it's a much better sound than we've ever had before. It's a solid rock album from start to finish, except for the instrumental piece – which is a slowish theme, but all the others are fast and solid rock. There's no acoustic rock on the album like songs such as "Don't Waste Your Time" and "Sign of the Times," which we have had on previous LPs."

Critical reception
Contemporary reviews
Retrospective reviews
In the September–December 1986 Slade fan club magazine, results of a 1986 opinion poll were published. Fans votes for Slade's best album of the 1980s had placed Till Deaf Do Us Part at No. 3.