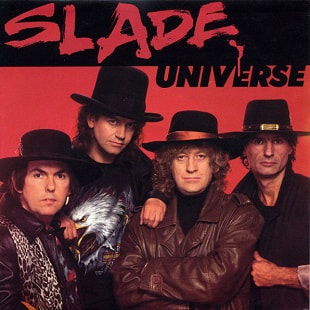 Universe is Slade's second and final single from their compilation album Wall of Hits. Released by Polydor on 2 December 1991, it failed to make an appearance in the UK charts and proved to be the band's last single before disbanding in 1992. The song was written and produced by Jim Lea.

In 2007, Lea would release his own solo version of "Universe" on his debut solo album Therapy.

Background
After the commercial failure of the band's 1987 album You Boyz Make Big Noize, and the end of their contract with RCA, Slade decided to take an eighteen month break. Although the band announced their intentions to record a new album, these plans did not materialise. Later in 1991, the band's former 1970s label Polydor Records approached the band with the idea of recording two new singles to promote a new compilation album Wall of Hits. Furthermore, if both singles were successful, the label was willing to release a new studio album.

The two singles, "Radio Wall of Sound" and "Universe", were soon completed, with "Radio Wall of Sound" being released in October 1991. The band's first Top 40 hit since 1984, it reached No. 21 in the UK. With the release of Wall of Hits in November, "Universe" was originally set to be released on the 25th of that month, however it was held back until early December in the attempt to attract the Christmas market and help promote the compilation. The single failed to chart in the UK and would be the band's final release of new material. With the commercial failure of "Universe", Polydor's option for a new studio album was withdrawn and the band would split up in 1992.

"Universe" was written by Lea after the idea for the song came to him as he was heading out to an Indian restaurant for an evening meal. Like "Radio Wall of Sound", "Universe" was originally a solo recording of Lea's, who had completed much of the song's recording prior to it becoming a Slade song. Lea planned to add strings to the song at Abbey Road, however as the studio was booked, he used a synthesiser to record the strings section at Rich Bitch Studios instead.

In a 1992 fan club interview, Holder spoke of the song in relation to "Radio Wall of Sound", and about its commercial failure: "I liked Universe even though I knew it was not such an instant song and it would take people time to latch on to it. I saw "Universe" as the stronger song and maybe if we had held it back for a while it may have been more successful but unfortunately it got lost in the Christmas market and there is just nothing you can do about it now. I think that everybody did a good job, we did a lot of TV, radio and press work around that period but it didn't translate into high sales of the two records. It was record company's decision [to release "Universe"]. The plan was always to do "Radio Wall of Sound", then the Wall of Hits album, followed by "Universe" to help carry the album along in the Christmas market. But we didn't realise how late "Universe" was coming out, it was actually two weeks later than planned. I don't know why, but by then we were into the Christmas mania season and not being such an instant track it lost out to the more popular records."

In his 1999 biography Who's Crazee Now?, Holder said: ""Universe" was very orchestral, backed by strings and totally unlike anything we had ever done before as Slade. I liked "Universe", just because it was so different. When we brought out "Universe", it bombed. It was too far from what people expected of us. That was the last thing we ever did together as Slade."

In a 2000 interview with Mojo, Lea recalled: "The last thing that came out was "Universe" - very big and lush. Towards the end the records were completely my songs. I'd taken control and it didn't feel like a band any more. Then this offer came to play Castle Donington with Bon Jovi. Noddy said if we weren't headlining, then we weren't doing it. He more or less said that he wasn't going on the road with Slade again. He wanted to be in the band – but I said that without getting out live it wouldn't cohere any more, that we'd lost it. All the fun had gone out of it, so I started getting into the property business, and took a psychology course at college."

Release
"Universe" was released by Polydor Records on 7" vinyl and CD in the UK and across Europe. In the UK, the single was also released on 12" vinyl and cassette. The first B-side, "Red Hot", was exclusive to the single and would later appear on the band's 2007 compilation B-Sides. It was written by Dave Hill and ex-Wizzard keyboardist Bill Hunt. The second B-side was the band's 1973 hit "Merry Xmas Everybody". On the 12" and CD formats of the single, the band's 1977 single "Gypsy Roadhog" was also included as a third B-side.

Promotion
In the UK, the band performed the song on This Morning, Motormouth and Pebble Mill. In the Netherlands, they performed the song for Countdown, however it was never broadcast. The same appearance saw Holder co-present the show with host Wessel van Diepen. As part of the promotional schedule for "Universe", Slade were also set to appear on the Northern Ireland talk and variety show Kelly, hosted by Gerry Kelly, in Belfast. However, the band's appearance had to be cancelled after their hotel was bombed on the eve of their arrival.

The band began promoting the single in Europe in 1992. In February, the band performed the song on the TV show Gottschalk.

Music video
A music video was filmed to promote the single, which was directed by William Clark and filmed in November 1991 at a studio in Shepherd's Bush. Rated as one of Slade's most evocative videos, Powell noted in his diary at the time that "we go Amadeus on the video", in reference to the 1984 American period drama film of the same name. The video featured the band performing the song; Holder with an acoustic guitar and Lea with a violin.  "Universe" was a regular feature throughout March 1992 on Sky TV's Video Jukebox of the Lifestyle channel.

In 2014, Clark recalled of working with the band for the Slade Discography Website: "I worked with Slade in the early 90s, writing and directing the videos for RWOS and Universe. Noddy was working at a radio station in Manchester and Jim was taking exams to become a psychotherapist. Don was the sweetest guy I met in the business and Dave was... well Dave. Universe was a much tamer affair [in comparison with Radio Wall of Sound], shot in a studio in Shepherd's Bush. What was interesting about that shoot was the graphics were all painted on a piece of glass about 6" x 4" by the scenic artist who did a lot of the work on Time Bandits the same way. So the shot of Dave playing guitar was achieved by him standing on a flight case at one end of an empty studio to get the scale, whilst the camera shot through this delicately painted small piece of glass at the other end. It's difficult to see now because there doesn't seem to be a decent print around, but in the days before CGI it really was imaginative and beautiful. I really enjoyed working with the guys - they were fun, creative and up for anything - and really, really nice guys."