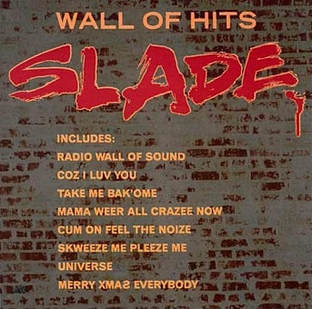 Wall of Hits is a compilation album, released by Polydor on 11 November 1991. The album included the last two singles to be recorded by the band: "Radio Wall of Sound" and "Universe". It reached No. 34 in the UK and remained in the charts for five weeks.

Background
After the commercial failure of the band's 1987 album You Boyz Make Big Noize, and the end of their contract with RCA, Slade decided to take an eighteen month break. Although the band announced their intentions to record a new album, these plans did not materialise and band activity remained limited. Later in 1991, the band's former 1970s label Polydor Records approached the band with the idea of recording two new singles to promote a new compilation album Wall of Hits. The two singles, "Radio Wall of Sound" and "Universe", were soon completed, with Polydor offering the option of a new studio album if both singles were successful. "Radio Wall of Sound" was released in October 1991 and reached No. 21 in the UK, earning the band their twenty-fourth Top 40 single and their first Top 40 hit since 1984.

Wall of Hits was then released in November and would peak at No. 34. It was certified UK Silver by BPI that month. A VHS of the same name was also released, featuring numerous music videos and filmed performances of the band's singles over their career. In December, "Universe" was released to attract the Christmas market and further promote the compilation over the festive period. However, it failed to chart and Polydor withdrew their option for a new studio album. The band would split up in March 1992.

The album contained twenty tracks covering the band's career from 1971 to 1991. However, some critics were quick to notice the omissions of a number of charting singles, including "In for a Penny, "We'll Bring the House Down", "All Join Hands" and "Myzsterious Mizster Jones". In a 1992 fan club interview, Holder spoke of the track selection on the compilation: "Something had to go to enable the inclusion of the two new tracks and the two RCA tracks which made it a good overall package, although we are not likely to get a volume two deal if the first volume doesn't do that well."

In a 1992 fan club interview, Dave Hill mentioned the compilation in a story of seeing Kiss live: "A couple of weeks back, I went to see Kiss in concert at the NEC. It was good to see Gene and the band again, and as many fans will know, Kiss do admit to being influenced by the music of Slade. The joke of the night was that Kiss had sent out for the Wall of Hits album to play in the dressing room to get revved up before they went onstage! Gene said to me that he just wanted to check and see if he had nicked all the riffs correctly! It was good to have a chat and they gave a good show, lots of pyrotechnics and tons of noise, but yes, really nice to meet up with them again."