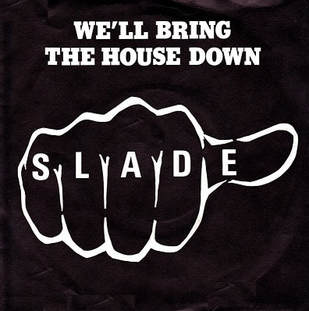 We'll Bring the House Down is Slade's first single from their ninth studio album We'll Bring the House Down. Released by Cheapskate Records on 23 January 1981, it reached No. 10 in the UK and remained in the charts for nine weeks. It was the band's first single to reach the UK Top 40 since 1977. The song was written by Noddy Holder and Jim Lea, and produced by Slade.

Background
Despite suffering from low popularity and a lack of chart action in the UK since 1976, Slade continued to record and tour, performing in smaller venues such as clubs and universities. However, their fortunes changed when they were offered a headlining slot at the Reading festival in August 1980, following a late cancellation by Ozzy Osbourne. The band's performance in front of the 65,000-strong crowd saw Slade back in the public eye. The music press began to take an interest in the band again, while heavy metal followers also began deeming the band 'cool'. The band quickly released the extended play Alive at Reading, giving the band their first chart action since 1977, while the compilation Slade Smashes! was a big success. To capitalise on the new interest in the band, the band recorded and released "We'll Bring the House Down" as their new single in January 1981. A successful comeback single, it reached No. 10 in the UK, with the album of the same name following in March. The song also peaked at No. 4 in the Melody Maker Chart.

The idea for "We'll Bring the House Down" originally developed with the song's chant. At one of the band's post-Reading shows in Belgium, the audience began repeating the chant. Backstage, Lea realised the potential of the chant and soon wrote the tune to the song. The song was recorded over two days in January 1981 at Portland Studios in London. To give the song a bigger, distinctive sound, some parts of the song was recorded in the men's toilets, most notably the drums. As a result, Holder dubbed the song "bog rock".

In a 1984 interview with Record Mirror, Lea spoke of the song: "We were getting this big ovation the week after the Reading festival. The crowd stayed at the end for 15 minutes and it wasn't just a few idiots down the front. The crowd were chanting this "woh oh oh oh oh" and there was a big argument going on in the dressing room. Our manager Chas Chandler was going "You've got to go on otherwise there's going to be a riot!!". We looked through the curtain and all the gear had been packed away and they're going "woh oh oh oh oh" and I thought there's got to be a song in that – it's great. Then years later I was watching Rock Goes to College and the crowd were doing our chant at a B. A. Robertson gig. I felt a bit sorry for the bloke and he came on and said "Will you stop that, it's a lousy tune with three notes and a crappy lyric"."

Speaking of the song in a 1982 interview with Kerrang!, Dave Hill said: ""We'll Bring the House Down" was really an unplayable record for daytime radio but it became a huge hit for us. And I think that was because it showed what we're about - having a good time and letting the crowd sing with us."

Later in March 1992, the band entered Rich Bitch Studios to record a new version of "We'll Bring the House Down". It was the band's final recording session and by the end of the month, Holder had decided to leave the band. The recording, later described by Lea as a "house/dance-style version" of the song, was never released.

Release
"We'll Bring the House Down" was released on 7" vinyl by the independent label Cheapskate Records in the UK, Ireland, Germany and Spain. In Australia and New Zealand, it was released by RCA Victor. For the UK and Irish release, the B-side was "Hold on to Your Hats". For the remainder of releases, the single featured "Wheels Ain't Coming Down" as the B-side. Both tracks were taken from the band's 1979 album Return to Base and would also appear on We'll Bring the House Down.

Promotion
In the UK, the band performed the song on the music show Top of the Pops and ITV's Moondogs. In Germany, they performed it on the TV show Musikladen. BBC radio DJ/presenter Mike Read noted the band's "electrifying" performance with the song on Top of the Pops. The following day, Read noted on his breakfast show that the programme seemed rather flat after the band's performance.

Music video
A music video was filmed to promote the single, which was directed by Eric Boliski. It was filmed before and during the band's concert at the Gaumont Concert in Ipswich on 17 January. The same film company had also recorded a documentary film on the band about their life on the road, although it was never given an official release.