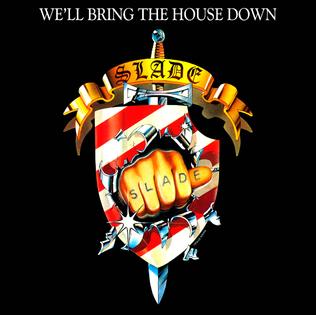 We'll Bring the House Down is Slade's ninth studio album, released by Cheapskate Records on 13 March 1981 and produced by Slade (except "My Baby's Got It" by Chas Chandler). The album reached No. 25 in the UK and remained in the charts for four weeks.

We'll Bring the House Down was the first studio album released by the band after their successful appearance at the 1980 Reading Festival. In order to capitalise on their revival, Slade quickly compiled this new album, made up of some new tracks and some recycled ones, mainly from their failed Return to Base album of 1979.

Background
Since their return from the US in late 1976, Slade had struggled to achieve much chart action in the UK. Regardless, the band continued to record and tour. Their 1977 theatre tour, which followed the unsuccessful Whatever Happened to Slade album, saw a drop in audience numbers. The band found themselves playing small gigs after that, including universities and clubs. The band's tours often ran at a loss, bringing their own PA and lightshow, while the band's new material, released through manager Chas Chandler's Barn Records sold little.

After the commercial failure of their May 1980 extended play Six of the Best, the band were on the verge of splitting up. However, their fortunes changed when they were offered a headlining slot at the Reading festival in August 1980, following a late cancellation by Ozzy Osbourne. The band's performance in front of the 65,000-strong crowd saw Slade back in the public eye. The music press began to take an interest in the band again, while heavy metal followers also began deeming the band 'cool'. In September, the band released the extended play Alive at Reading, which featured three songs recorded at the festival. It reached No. 44, giving the band their first chart action in years. The band's former label Polydor did not take long to jump on the band's new-found success either, releasing the compilation Slade Smashes! in November. It reached No. 21 and soon achieved Gold status in December for selling over 200,000 copies.

In January 1981, Slade released the single "We'll Bring the House Down" which reached No. 10 in the UK. In March, the album of the same name was released, reached No. 25. The album helped maintain the band's momentum, while they were also able to start playing in larger venues once again. A second single, "Wheels Ain't Coming Down", was also released in March, reaching No. 60.

Release
Shortly before the album's release, Dave Hill explained in a fan club interview why the album mainly used tracks that had already been released: "Obviously a lot of the fans that have bought Return to Base, Six of the Best and one or two other things - they are going to have a lot of this material. But it is a compilation LP of a lot of the material that we have recorded over the last 18 months, which as the fans know, the majority of the public have never even heard. It's really for the benefit of the new fans that are coming along and who are in the fan club and have none of the old material. It won't be the same as Return to Base as it will have a lot of the tracks pulled out and other numbers such as "Dizzy Mamma" and "Night starvation" and "When I'm Dancin' I Ain't Fightin'" added, making up a more rocky album. It will basically consist of the live act at the moment, so anyone who's into the live act should like the album. But for the benefit of the old fans, new material is in the pipeline. After this tour we shall be making a new single and a new album."

The album's sleeve featured a new Slade logo designed by Chandler. According to the band, the 'fist' bursting through the shield on the sleeve was to signify "four royal bastards".