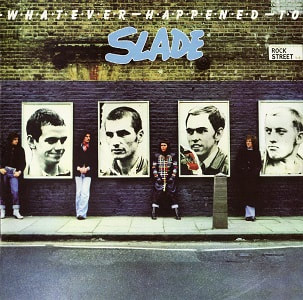 Whatever Happened to Slade is Slade's seventh studio album, released by Barn Records on 21 March 1977 and produced by Chas Chandler. The album failed to chart, leaving Slade's popularity to continue waning as punk and disco became the two new music trends of the time. The glam rock movement, of which Slade were associated, had largely died by this point.

With Whatever Happened to Slade, the band stood their ground as a straight rock group, largely removing their "glam" statements from earlier in the decade. Although it was met with support from the English punk uprising, the album's commercial failure saw the band's financial woes continue.

Background
By 1975, Slade felt their commercial success had peaked in Great Britain and Europe. At manager Chas Chandler's suggestion, the band agreed to move to the United States, the only major territory that the band had yet to crack. The band held out in the US for almost two years, recording the soul-influenced Nobody's Fools (1976). Although the band did not achieve significant airplay and record sales in the US, their reputation as a reliable and exciting live rock act was enhanced and the band felt rejuvenated.

Slade returned to the UK in August 1976 to face the UK music business much changed from when they had left. Punk rock had now exploded and had become the dominant influence on youth culture and the music press. Despite Slade's reputation as one of the great high energy bands of their day, in this environment Slade were considered unfashionable. Regardless, the band were determined that they were now a better live act than ever and refused to call it a day. Recording of their seventh studio album began in August. As reported in a fan club magazine of the time, the band hoped to record a total of sixteen tracks and pick the best to release on the album.

In January 1977, the band released the album's only single "Gypsy Roadhog". However, after performing the song on the children's television show Blue Peter, complaints about the song's drug references led to the record receiving little play on BBC Radio 1. As a result, the single stalled at No. 48, while Whatever Happened to Slade failed to chart when released in March. The album's title had been suggested by Chandler after he spotted some graffiti on a London bridge. Don Powell told Record Mirror in 1977: "It was a tongue in cheek thing. When we got back to England, that's what people kept saying to us, so we thought we'd use it on the album." Despite its lack of commercial success, the album was later cited as having an impact on the grunge and alternative rock genres, with both Billy Corgan of The Smashing Pumpkins and Kurt Cobain of Nirvana citing the album as influential.

Recalling the album in the 1984 biography Feel the Noize!, Jim Lea said: "It was a heavy metal album. It was a mistake and I was against that title." Noddy Holder said in his 1999 biography Who's Crazee Now?: "Whatever Happened to Slade was much rockier than Nobody's Fools. It was a return to our original sound". In a 2009 interview answering fan questions, Don Powell was asked which Slade album he would recommend to a new listener as the "definitive Slade studio album". He said: "Whatever Happened to Slade because at that particular time we had nothing to lose."

During a 2017 live question and answer event with Lea at the Robin 2 club, Lea spoke of the album: "The Whatever Happened to Slade album came out of us touring in America. There were a lot of bands over there that had got this guitar identity. There was the Allman Brothers with Duane Allman, there was ZZ Top coming along, and the guitar player was a big thing. So we started coming up with Whatever Happened to Slade and I thought it was important we had the guitar breaks. I worked them out and then we went through it. Dave did all the playing on the record."