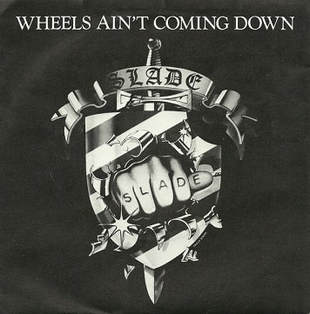 Wheels Ain't Coming Down is Slade's second and final single from their ninth studio album We'll Bring the House Down. Released by Cheapskate Records on 27 March 1981, it reached No. 60 in the UK and remained in the charts for three weeks. The song had been first released in 1979 as an album track on their eighth studio album Return to Base. It was written by Noddy Holder and Jim Lea, and produced by Slade.

Background
"Wheels Ain't Coming Down" was released as the opening track on Return to Base, which was a commercial failure in 1979; a period when the band's popularity was low. The song also appeared on the 1980 extended play Six of the Best, which also failed to chart. Later in 1980, the band's fortunes were revived after a successful performance at the Reading Festival. To capitalise on the new interest in the band, Slade released the Top Ten hit "We'll Bring the House Down" in January 1981, with the album of the same name following in March. The album featured a number of tracks re-used from Return to Base, including "Wheels Ain't Coming Down". Following up success of the title track, the band decided to release "Wheels Ain't Coming Down" as the follow-up single in March. It reached No. 60, lasting three weeks on the chart.

"Wheels Ain't Coming Down" tells the tale of a near-death flying experience suffered by Holder and Lea when travelling to Los Angeles. The song also references Lea by his nickname "Midlands Misery". In a 1981 interview with Daily Star, Holder recalled: "Jim and I were on the way to a radio station when the captain told us he could not get the wheels down to land. We were diverted to another airport for a crash landing. It's not a great feeling knowing you might have only 45 minutes left in life. We drank all the booze there was going. Happily the pilot brought the plane down safely."

Release
"Wheels Ain't Coming Down" was released on 7" vinyl by the independent Cheapskate Records in the UK only. The first 20,000 copies of the single were issued with a picture sleeve. The B-side, "Not Tonight Josephine", was previously the B-side to the 1979 single "Sign of the Times".

Music video
A music video was filmed, however it was never shown at the time of single's release. It was directed by Eric Boliski. The video was filmed on the afternoon of 10 March 1981 at the Southampton Gaumont, prior to the band's concert there that evening.