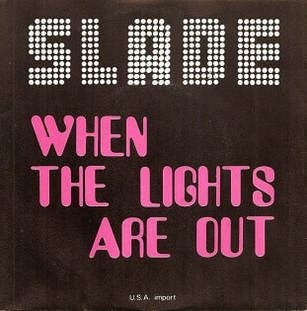 When the Lights Are Out is Slade's fourth and final single from their fourth studio album Old New Borrowed and Blue. Released in the United States and Belgium by Warner Bros. Records in May 1974, the single failed to chart. The song was written by Noddy Holder and Jim Lea, and produced by Chas Chandler.

Background
The material on Old New Borrowed and Blue was recorded amid the band's touring and promotional activities in late 1973. It also marked the return of Don Powell to the studio after suffering a near-fatal car crash in July, which briefly threw the band's existence into doubt. In America, the album was titled Stomp Your Hands, Clap Your Feet and released in February 1974. That same month, the lead single in America, "Good Time Gals", was released but failed to chart.

"When the Lights Are Out" followed as the second single in May and was released to coincide with the band's American tour of May-June. However, it also failed to gain any commercial success. In a fan question and answer session with Lea in 2017, he revealed his wish that the song had been given a full single release in the UK and elsewhere: "After "Merry Christmas Everybody" and the massive success of 1973 it was hard to find a follow up quickly. I wanted "When the Lights Are Out" (not because I sang it), but I recorded it as The Dummies and it was play-listed at Radio 1 and record of the week on Radio Luxembourg too."

"When the Lights Are Out" was the first Slade song to feature Jim Lea on lead vocals, with Noddy Holder joining in on the chorus. In a 1974 interview for readers of 19 magazine, Holder jokingly commented of the track: "There's nothing like a good singer and Jimmy's nothing like a good singer." Speaking to Ken Sharp in 1999, Lea recalled: "I've never considered myself to be a singer and was never considered by anyone in the band to be a singer. But it was Nod's idea that I should sing that, 'cause he said "Look, why don't you sing it?" and some people said I sounded a little bit like John Lennon, you know, my hero. It's triple tracked because my singing's so bad! I triple tracked it to try and even the tuning out a little bit."

Release
"When the Lights Are Out" was released on 7" vinyl by Warner Bros. Records in America only, but also in Belgium as an import. The B-side, "How Can It Be", was written by Holder and Lea, and also included on Old New Borrowed and Blue. In addition to the main US release, a promotional version was also issued, containing "When the Lights Are Out" on both sides of the vinyl, one in mono and the other in stereo. The Belgian release was merely the imported US release, but housed in a Belgian-printed picture sleeve.