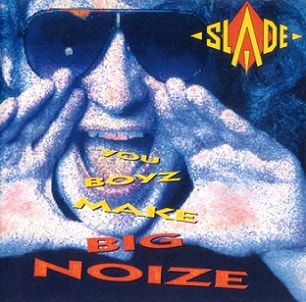 You Boyz Make Big Noize is Slade's fourteenth studio album, released by RCA on 27 April 1987. It reached No. 98 in the UK charts. The album was largely produced by Jim Lea, with two tracks being produced by Roy Thomas Baker and two by John Punter. For the album, the band set out to record a 1970s sound using 1980s technology. It was the last studio album by the original lineup, prior to their split in 1992.

The US version of the album, which was released on the CBS label on 3 August 1987, replaced "Fools Go Crazy" with the title track "You Boyz Make Big Noize", which was recorded after the release of the UK/European versions of the album.

Background
Following Slade's decision to stop touring in 1984, the band continued to record new material. The 1985 album Rogues Gallery had been a hit across Europe but saw only limited success in the UK and US. When the band set out to record their next album in 1986, they hoped to record a hit album that would put Slade back into the public eye. Initially the band hired producer Roy Thomas Baker to produce the album, but the band felt his working methods were too lengthy and expensive. In the end, Baker completed two tracks, John Punter produced another two and Jim Lea finished the rest.

The lead single, "Still the Same" was released in February 1987 and stalled at No. 73. A lack of airplay on Radio One was seen as an important factor for the chart position as the single had been B-Listed and not A-Listed on the radio's playlist. The second single, "That's What Friends Are For" was released a week before the album in April and reached No. 95. The poor chartings saw RCA unwilling to invest large amounts of money into promoting the album, which reached No. 98 in the UK. In July, a non-album single of the same name, "You Boyz Make Big Noize" was released by the band under the Cheapskate Records label. It was distributed by RCA and reached No. 94. Around the same time, "Ooh La La in L.A." was released from the album in America by CBS and Germany by RCA. The lack of commercial success resulted in the end of the band's contract with RCA. Despite this, the album track "We Won't Give In" was later released on the Cheapskate label as the album's fourth and final single, but only reached No. 121 in the UK.

In a mid-1986 interview, Noddy Holder spoke of the upcoming album: "We've finally got it finished and feel we have some of the best songs we've ever written." He told Paul Cole of the Sandwell Evening Mail  that same year: "We're putting together some of the best music we've ever played and we've been working with top producers to get the sound exactly right. You don't go to all that trouble if you think that there's no future in what you're doing. We have the buzz again. We're playing in all sorts of different styles and we're writing good songs. It's very refreshing." Discussing the band's approach on the album, Holder told the Newcastle Evening Chronicle in February 1987: "We approached it a little differently, using three producers. We wanted plenty of light and shade on the album, and it's difficult coming up with new ideas, so we used their different approaches. We've aimed at each song as a potential single." Speaking in a late 1987 fan club interview, Lea commented of his production work on the album: "When I listened to You Boyz Make Big Noize, which is the last thing I did, I thought "this really stands up, I can put this on and be proud of it"."

Due to Holder's personal reasons, the idea of touring to promote the album was ruled out. Speaking in a 1987 fan club interview, Dave Hill said: "We could announce a tour now, but caution tells us that we'd do better to announce one on the back of a hit. We haven't called it a day on the touring and if luck would have it, we could be touring after this LP." Responding to rumours of the band splitting up, Hill replied: "Fans might be feeling a little left out and a bit disappointed, but they've got to understand that 21 years now is a long time to stay together as a group. We are a little older and we are still trying. I think that deep-seatedly within the group, every one of us would play live, but what we are searching for is a way to take us to another stage of success, and it's a hard route that we're trying. We don't just want to go out and have people say we did a tour just to say we're around. Although the fans will be there and love it, the public at large will have an attitude of 'let's go and see how old Slade is, cos they're good for a laugh'. To try and put ourselves in a better category, I would like to see us up at the NEC and sell it out. So that we're not just doing the rounds for the rounds sake, we want to show our fans that we're not simply trying to stay together. We haven't reached the market that Dire Straits have captured and they've never been as exciting as us. If you think about us, we really ought to be in that level, shouldn't we?"

Without a contract with a major label, Slade would not record another album again. In 1991, the band recorded two new singles for Polydor, "Radio Wall of Sound" and "Universe", but would split up shortly after in 1992. Don Powell later recalled of the album: "It wasn't us, there was no identity on that album. It would have been nice for the original band to have gone out with a better album, like the Slade in Flame album or Slayed?. It was like a certain magic was missing. The closeness that we'd had wasn't there."

Recording
You Boyz Make Big Noize was primarily recorded at Music Works, Portland Studios and Wessex Studios. The album's title was chosen after Betty, a Wessex Studios tea-lady, commented to Slade "you boys make big noise" during a recording session. For the album, Holder and Lea demoed around eighteen tracks, while Hill put forward four of his own demos.

The album's twelve tracks, the title track and three B-sides were recorded at the following:
In an early 1987 fan club interview, Powell spoke of the album's completion: "We finished the album yesterday, actually. We spent yesterday piecing it together and sorting out the running order. We know exactly which tracks will be on the album - all of which is new material. The album has taken us a long time to record, especially the tracks that John Punter and Roy produced. We spent the first two days with Roy just trying to get the drum sound as he wanted it. He had forty odd mikes over my kit, and it sounded like thunder in the studios. The album is more of a sing-a-long one, as opposed to a heavy metal album."

In a late 1986 fan club interview, Lea spoke of the band's work with Roy Thomas Baker: "I was out with Roy one night, and he got serious for one moment, and said "The only reason I'm here with you lot is because right now in America all the young bands, certainly in Los Angeles, are searching for the formula that Slade created - commercial songs with that edge, and that sound where it all comes out as one". Roy Thomas Baker was the one who put the word 'producer' on the modern map of production - it was a great compliment from him."

Speaking to John Strednansky of Metal Rendezvous in 1987, Holder said of the album: "On this new album, we managed to mix together the old Slade sound and all the new technological things, certainly on the tracks that we've used outside producers on. We've managed to [amal]gamate the spontaneity and rawness of Slade and the new approach to recording."

In 2012, Matt Butler, one of the album's engineers, recalled of his time working in the studio with the band for the Slade Discography Website: "My time with Slade was quite brief, as I was engineering for another old friend, their producer John Punter. John is a genius. Hugely respected by all of us in London, he rarely worked with anyone else (always producing/engineering/mixing on his own). I was privileged to be by his side with Slade, especially as they had such a rapport. His skill was to mix his records with no EQ and faders in a straight line and the minimum of 'effects'. He would take hours and many packs of cigarettes to achieve this - we would joke that he could set it all up that way in five minutes and come down the pub! He was a serious guy though and a seriously good record-maker. My memories of the band are happy ones! Jim was the clever writer and I would say the most in control. Noddy is a superb singer and effortless behind the microphone. Crikey I was still in short pants when they had big hit records. The sense of humour about the band was evident. The studio had a very attractive receptionist and I recall chatting to her as I heard the band coming down the corridor. Wanting to chat more, I tucked down behind the desk and grabbed an eyeful of her legs in the bargain. I was wearing a junk-shop tweed jacket at the time, complete with elbow patches... after a search for me, Dave came up to the desk and I heard him say: "excuse me love, you haven't seen our engineer have you? Nice guy - long hair and looks a bit like a Geography teacher!" Both the girl and I fell about laughing and I duly walked to the studio for another day with Slade, or "Sla-day" as John Punter would call them!"

Promotion
The album received limited promotion from RCA, largely due to the disappointing sales of "Still the Same". No music videos were filmed to promote the singles. In a 1987 fan club interview, Hill discussed the song's failure: ""Still the same" is basically being regarded as a flop in terms of what was expected of it. I think the record company were mostly disappointed as it was them rather than the group who chose it. We brought this record out, not in the usual Christmas period, which on the face of it seemed to me to be a feasible idea as an attempt to get away from the 'Slade only exist at Christmas time' situation. On listening to opinion though, it seems to have been regarded as another "My Oh My"-type song, which perhaps should have come out at Christmas. When "My Oh My" was released, it was just as slow to take off, but as soon as we got the radio play, it rocketed. "Still the Same" did virtually the same chart-wise in its first few weeks, but at the point where "My Oh My" picked up radio play, "Still the Same" was dropped completely."