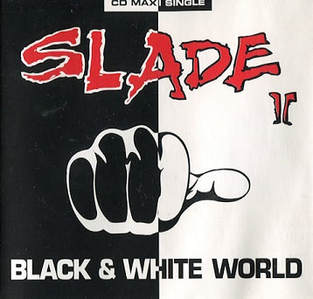 Black & White World is Slade II's second and final single from their debut studio album Keep on Rockin', released by Columbia in July 1995. It was written by Dave Hill and Bill Hunt, and produced by Paul Despidgeleare.

Background
In September 1994, Slade II began recording their debut album, Keep on Rockin', in Belgium with producer Paul Despidgeleare. Released in the UK and across Europe in November 1994, "Black & White World" was picked as the album's second single, following the release of "Hot Luv" earlier in March. However, like the previous single, it was not a commercial success, failing to make a chart appearance anywhere in Europe.

Release
"Black & White World" was released as a CD single by Columbia across Europe and in Scandinavia. In Denmark, it was released by CMC Records. For the single, a remixed version of the song was featured as the main track, along with the album version and another version dubbed the "Telephone Mix".

In addition to the main single release, a re-worked version of the song was released in Belgium and France. Featuring the rapper Daddy K, it was re-titled "Who's to Blame (Black & White World)".