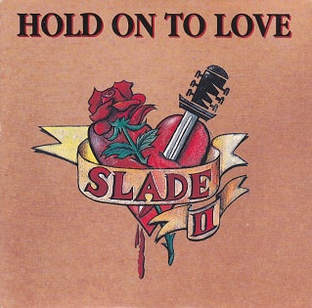 Hold on to Love is the debut single of Slade II, released by Play That Beat!/Emergency Records! in November 1993 as a non-album single. It was written by Dave Hill and Bill Hunt, and produced by Hill and Len Tuckey.

Background
In March 1992, Slade disbanded with the departure of Noddy Holder and Jim Lea. That year, Dave Hill decided to form his own version of the group as Slade II, which included Don Powell. Steve Whalley was recruited as lead vocalist, Craig Fenney on bass and Steve Makin on guitar. The band played their first gig in December 1992 in Sweden and began regularly touring from that point on.

In June 1993, Slade II recorded two tracks at Rich Bitch Studios in Birmingham; an original titled "Hold on to Love" and a cover of Chuck Berry's "Run Run Rudolph". Both were recorded in the hope of having them released as a single later in the year. The Slade International Fan Club's magazine of Summer 1993 revealed that "Run Run Rudolph" was likely to be the A-side, although no details had been confirmed. The recorded tracks were then presented to the Belgian-based record label Play That Beat! who immediately took great interest in "Hold on to Love". With a deal soon made to have the song released as a single, "Hold on to Love" was released in November 1993. It received mixed reviews but did gain TV and radio exposure. However, it was not a commercial success and did not make a chart appearance anywhere in Europe.

Speaking of his interest in Slade II, Marc Debouvier of Play That Beat! told Music & Media in 1995: "When the band did a live date here, I caught them in the act. I always wished to get them on my roster, but without the synth jiggery-pokery of their last albums."

Promotion
A music video was filmed to promote the single. It was directed by Serge Bergli and produced by Pierre-Paul Puljiz.