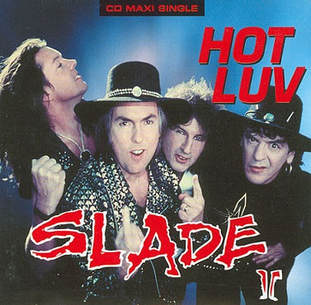 Hot Luv is Slade II's first single from their debut studio album Keep on Rockin', released by Columbia in March 1995. It was written by Paul Mellow (a pseudonym for Paul Despidgeleare), Dave Hill and Don Powell, and produced by Despidgeleare.

Background
In September 1994, Slade II began recording their debut album, Keep on Rockin', in Belgium with producer Paul Despidgeleare. Released in the UK and across Europe in November 1994, "Hot Luv" was picked as the album's first single and was released in March 1995. However, it was not a commercial success, failing to make a chart appearance anywhere in Europe. "Hot Luv" was largely written by Despidgeleare under the pseudonym Paul Mellow. Both Hill and Powell received co-writing credits, with Powell having helped finish the lyrics.

Release
"Hot Luv" was released as a CD single by Columbia across Europe. It was distributed by Sony Music. In addition to the main version of the song, an extended version was also included, along with another song "Wild Nites". "Wild Nites" was originally recorded by Hill as part of his solo project Blessings in Disguise in 1989, as the B-side of the single "Crying in the Rain", featuring Noddy Holder on vocals.