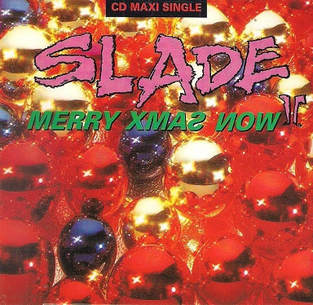 Merry Xmas Now is the second single of Slade II, released by Play That Beat!/Columbia in November 1994 as a non-album single. It was written by Dave Hill and Bill Hunt, and produced by Hill and Len Tuckey with additional production by Paul Despidgeleare.

Background
Following the 1993 release of their debut single "Hold on to Love", Slade II returned to Rich Bitch Studios in Birmingham during May 1994 to record a Christmas single, "Merry Xmas Now". Later in September, they began recording Keep on Rockin' in Belgium with producer Paul Despidgeleare. "Merry Xmas Now" was released as a single in November 1994, the same month as the album's release. However, it was not a commercial success, failing to make a chart appearance anywhere in Europe.

Speaking to the Gryphon in 2016, Hunt said of the song and his songwriting with Hill: "I got to know Dave Hill in the 80s and did some writing with him. We wrote an album for the new Slade line up, called Slade 2 for a time, and on that there was a Christmas track which we think is better than "Merry Xmas Everybody"."

Release
"Merry Xmas Now" was released on CD by Play That Beat! in Belgium and Columbia across the rest of Europe. In addition to the main "Single Version" of the song, two additional versions were included; "Unplugged" and the "Party Mix". The "Unplugged" mix, over a minute shorter than the main version, features stripped-back instrumentation, mainly in the form of keyboard and guitar, and no brass section. The "Party Mix" is an instrumental version of the song".