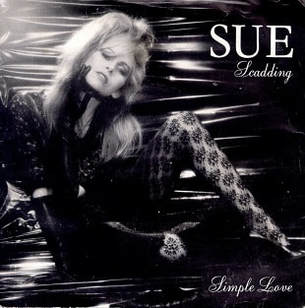 Simple Love is a non-album single from the British model/actress Sue Scadding, released by Speed Records in August 1983. It was written by Jim Lea and Noddy Holder, and produced by Lea.

Background
Sue Scadding was first introduced to Jim Lea when she joined Slade on stage during their concert at the Hammersmith Odeon in December 1982. Dressed as "Mother Christmas", Scadding played the role of backing dancer during the band's performance of "Merry Xmas Everybody". After the show, Lea's brother Frank spoke to Scadding and suggested that Jim may have a song for her to record. Frank later phoned Scadding to say that Jim had a song, and the pair then worked together on the recording of "Simple Love", a song penned by Lea and Noddy Holder. The song was recorded in 1983 and released in August that year, but failed to make an appearance in the UK charts.

During recording, the song's working title was "Whatever Happened to Simple Love". While Lea contributed backing vocals in the chorus, Wendy Woo of the punk band the Photos contributed backing vocals in the verses. In an interview with Sounds in October 1983, Scadding said: "When I was dancing on stage with Slade at Hammersmith Odeon, I met Jim Lea’s brother Frank, who runs Speed Records. He told me Jim had lots of songs and maybe he had one for me. Later on Frank called me and said "Jim’s got a song, do you wanna do it?". And so I finally did it for real. I really like singing. I have to work hard at it but I really do like it. Jim said he thought I was very good because I’d just stand there and sing and sing and sing.”

In August 1983, the Sun reported Lea having been spotted with Scadding nightclubbing in London. Lea was quoted in the article: "Don't get things wrong. I've written a song for Sue called "Whatever Happened to Simple Love" and I'm producing the record. Sue is a lovely girl, but I've been happily married for 18 years. Our relationship is purely business. I don't want to get a backhander from the missus."

Scadding later recalled of the song in 2012: "This was almost 30 years ago and Jim was experimenting with layering sound; he sings with me in the chorus. Wendy Woo from the punk band The Photos sang in the background in the verses. I'd love to remix it!!! I really can't remember if it was going to be originally be titled "All You Need is Simple Love" or "Whatever Happened to Simple Love". It was only about what fitted best on the record cover!"

Release
"Simple Love" was released on 7" vinyl by Speed Records in the UK only. It was manufactured and distributed by Spartan Records. The B-side, "Poland (Instrumental)", did not involve Scadding but was a recording from 1979-80 by Lea's musical project the Dummies, which he had formed with Frank. Although it was not released by the Dummies, "Poland" had first surfaced in 1982 as a single release under the pseudonym Greenfields of Tong, where the instrumental version appeared as the B-side. The song itself is a reworking of the Slade track "Lemme Love into Ya" from their 1979 album Return to Base.

The single featured photography by Robin Chaphekar of Scadding posing. Scadding recalled in 2012 of the photo shoot: "I've still got the dress, the tights and the shoes, but the rubber gloves and bra disintegrated years ago!"