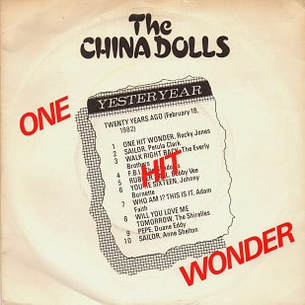 One Hit Wonder is a non-album solo single from Jim Lea under the pseudonym the China Dolls. Released by Speed Records on 10 December 1982, it failed to make a chart appearance in the UK. A re-release of the Dummies' 1980 song "Didn't You Use to Use to Be You?", it was written by Noddy Holder and Jim Lea, and produced by Lea.

Background
"Didn't You Use to Use to Be You?" was born out of the Dummies, a music project he formed with his brother Frank in 1979. With Slade suffering from a period of low popularity and resistance from radio, Jim wanted to find out whether it was his and Noddy Holder's songwriting or simply a reluctance from DJs to play new Slade material. Both Leas formed Cheapskate Records, which Frank wanted to use to prove that any independent label, with the right promotion and distribution, could release a hit single.

Following the release of their debut single "When the Lights Are Out", the extensive radio airplay of the song encouraged them to release a follow-up. "Didn't You Use to Use to Be You?" was recorded during 1980 and released in August that year. Although it failed to chart like the previous single, again there was a lot of airplay; the song was placed on BBC Radio 1's 'A' playlist and received regular plays on various other stations across the country.

Distribution issues had resulted in the single's failure to chart. The single suffered with the release of Slade's extended play Alive at Reading, which was also released on Cheapskate Records. The label's agreement with RCA meant that only one record could be marketed and distributed at a time. The Dummies would release one further single, "Maybe Tonite", in 1981. However, both Frank and Jim Lea later had the song re-released as "One Hit Wonder" under the artist name the China Dolls. They felt the song deserved another attempt at commercial success. However, the song again failed to chart.

Release
"One Hit Wonder" was released on 7" vinyl by Speed Records. It was distributed by PRT Records. The B-side, "Ain't Love Ain't Bad", was a Slade cover, which had appeared as an album track on the 1977 album Whatever Happened to Slade. A picture sleeve came with the single.