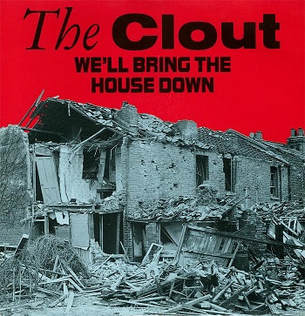 We'll Bring the House Down is a non-album solo single from Jim Lea under the pseudonym The Clout. Released by Mooncrest Records in July 1990, it failed to make an appearance in the UK charts. A reworking of the 1981 Slade hit, produced by Lea, the song was written by Noddy Holder and Lea.

Background
Following Lea's work with his brother Frank on the music project The Dummies in 1979-80, he spent more time in the 1980s and beyond recording further solo material on an infrequent basis, most of which has not been released to this day. By the late 1980s, Lea's solo work in the studio was increasing and "We'll Bring the House Down" was released as Lea's second solo single (discounting The Dummies-related releases).

The version was first mentioned in early 1990 by the Slade International Fan Club, who revealed Lea had recently recorded the song with a female singer. Described as a house-styled version of the song, it was originally uncertain whether it would be released or not. In a late 1989 interview with Lea, he spoke of the idea for the song in relation to the new technology available to record music: "I don’t use tape recorders, I don’t use guitars, I don’t use anything. I picked up a guitar the other day and then after a short time my fingers started hurting just like when I first started, because I don’t play enough. I don’t need all these things, guitars get in the way, tape recorders get in the way, musicians get in the way. Now you’ve got computers to do all that sort of thing, who needs instruments? I've been in the studio a bit just lately and just dipping my toe into the computerised world of music. I think to myself, hang about am I going to do things like I always did or am I going to get on the band wagon with computers and things? I went into the studio yesterday and hardly touched a thing but came out with nearly a finished track. I’ve got this idea to do "We’ll Bring the House Down" as a house number in the style of Metal/House fusion with the chorus in Metal and the verse in a House sampled type sound. I just get an idea, book the studio and get on with it. Frank said "Why don't you do this and that" and I went into the studio with about twenty songs I wanted to do but finished up trimming this down to five."

"We'll Bring the House Down" was released in July 1990 through Mooncrest Records. Due to the quite nature of the single's release, it did not make a chart appearance in the UK, remaining largely unknown outside of the Slade fan base. Later in March 1992, Slade would record a new version of "We'll Bring the House Down" at Rich Bitch Studios in Birmingham. It was the band's final recording session and by the end of the month, Holder had decided to leave the band. The recording, later described by Lea as a "house/dance-style version" of the song, was never released.

Release
"We'll Bring the House Down" was released on 7" vinyl by Mooncrest Records in the UK only. The B-side, "Jim Jam", is a two minute instrumental penned by Lea. According to the Slade International Fan Club, the single was originally aiming for an April release.