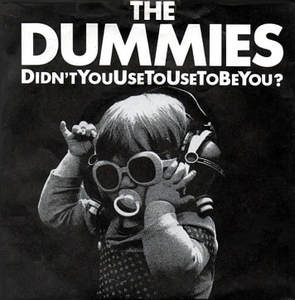 Didn't You Use to Use to Be You? is the second single of the Dummies, a musical project formed by Jim Lea and his brother Frank. Released by Cheapskate Records on 8 August 1980, the song failed to make a chart appearance in the UK but did gain much radio airplay. The song was written by Noddy Holder and Jim Lea, and produced by Lea.

"When the Lights Are Out", a cover of the 1974 Slade song, was released as the debut single in 1979. It gained extensive radio play, but suffered from distribution problems. By the time it was re-released on Pye Records at the beginning of 1980, the song was at the end of its airplay run and subsequently failed to chart. Despite this, the extensive airplay of the single convinced the pair to record more material as the Dummies and release a follow-up. Although their version of Slade's "Nobody's Fool" was originally announced as the next single, the idea was scrapped once they had more material recorded.

One of the songs, "Didn't You Use to Use to Be You?", was specifically written by Jim and Holder. Featuring Jim's wife Louise on backing vocals, the single was recorded at Portland Studios in London and released in August 1980 on Cheapskate. Again the single generated much airplay. It was placed on BBC Radio 1's 'A' playlist, which meant it was expected to become a “Top 40 Record” and so gained three to four spins per day. It was also listed a "Bullet Record" on Radio Luxembourg and gained much play on many ILR stations. It was chosen as Melody Maker's "Pick of the Week" during that month too.

However, distribution issues again resulted in the single's failure to chart. While it still retained airplay, Dave Robinson of Stiff Records offered to release the single, but negotiations broke down. The single suffered with the release of Slade's extended play Alive at Reading, which was also released on Cheapskate Records. The label's agreement with RCA meant that only one record could be marketed and distributed at a time. Later in a 1986 fan club interview, Jim Lea recalled: "That record looked like it was going to happen. Just after Reading, Slade moved on to the Cheapskate label because we had to get a record out like yesterday, but The Dummies record suffered because of the Alive at Reading ’80 E.P. internally within the company, as we didn’t realise that we could only have one record out at a time because of the distribution deal Cheapskate were in. We didn’t realise that The Dummies had gone – we sort of found out three weeks later, when it was lost."

Writing
In a 1980 interview with the Slade fan club, Frank Lea spoke of the song: "Jim and Nod wrote it. Jim had the idea for the storyline for the record, and he told Nod – and Nod then just based his lyrics around what Jim wanted. Jim actually got the idea for the record when he popped out to the Fish ‘n’ Chip shop in Wolverhampton. We next went round to Louise’s father’s warehouse and rehearsed the record, just the two of us – and then we came down to London and recorded it, with Louise singing on it, and got it done in one day again. The story’s about some guy that years ago released a record and it got to number one, but since then has had a downfall, and he’s been labelled as a “one hit wonder”. The storyline goes that he’s selling brushes nowadays, and people keep saying to him “didn’t you used to be famous?” It’s like what Jim gets in a way, as kids in the street come up to him and say “didn’t you used to be so-and-so?” – which really annoys him. At the end of the record the lyrics go that this guy is sitting watching TV, looking at all the modern rock stars, and he thinks “why can’t that be me?” – because he’s upset that he’s had his success, but it was very short-lived. The chorus of the record is “Didn’t you used to be, used to be you”, which Jim came up with, was given to Nod, but he came up with the other words himself. Actually, I think the lyrics are some of the best that Nod has ever come up with, they’re really good. The records in stages, it’s a "Bohemian Rhapsody" type of thing; it’s got about five different stages. The only thing is that there’s nothing to grasp onto the first time you hear the record, you have to hear it a few times then it becomes very catchy. The only draw back is whether the radio stations will bother listening to it a few times before deciding whether to playlist it."

Noddy Holder also spoke of the song in a 1980 fan club interview, in relation to how both Dave Hill and Don Powell, along with the manager Chas Chandler, had criticised some of his and Lea's songs: "There was a period of us writing songs and seeing how they turned out. Like "When I’m Dancin' I Ain’t Fightin", "Night Starvation" and "9 to 5" – to us they were all good songs – but they didn’t sell huge quantities of records. Therefore we got to a point where we thought that we’d cool it for a while, and not go in the studio. Jim was working on The Dummies – so me and Jim decided to write a song specifically for The Dummies. It wasn’t written as a Slade song, because Jim had the idea in his mind how he wanted to do the Dummies record. He played the tune to me, I wrote the lyrics to it – he worked out how he wanted to do it, and the final record got lots of radio play. So we knew that we could still write songs that would get played on the radio. Then it was a case of thinking “where do Slade go from here”. We now knew that our songs were strong. Then the Reading Festival came along."

Release
"Didn't You Use to Use to Be You?" was released on 7" vinyl by Cheapskate Records. It was distributed by RCA Records. The B-side, "Miles Out to Sea", was a Slade cover, which had appeared as an album track on the 1974 album Old New Borrowed and Blue. Initial pressings of the single came with a picture sleeve with a photography of Jim Lea's three year old daughter Bonny on the cover. Frank Lea revealed to the fan club in 1980: "You see, Bonny’s always wearing headphones. Jim thought it would be a good idea to take some photographs of her wearing them – and at the same time we thought that it would be great for a cover for the single. We just jested with the idea, then we took it seriously, had the photos taken by Mickey Legg, and now we’ve had the sleeves done. They’ve turned out really well, I’ve seen the finished sleeve and I’m more than pleased with it."

Plans to release the single in Europe did not come to fruition. In a 1980 fan club interview, Frank Lea revealed that: "If we get a release in Europe, which looks on the cards, we’ll record another B-side and use one of my numbers." Later in 1982, "Didn't You Use to Use to Be You?" was re-released as "One Hit Wonder" under the artist name the China Dolls. This was due to the fact that both Frank and Jim Lea felt the song deserved another attempt at commercial success, however, the re-release failed to chart too. Both the song and "Miles Out to Sea" were later included on the 1992 compilation album A Day in the Life of the Dummies, which gathered all of the Dummies' recordings.

Promotion
With Jim Lea's commitments to Slade, who had received a revived public interest following their performance at the 1980 Reading Festival in August, the song's promotion was largely handed to the distributor and label, as well as Frank Lea.

In September, the trio appeared on the UK BBC1 show Multi-Coloured Swap Shop to perform the song, along with "Miles Out to Sea". It was broadcast on 27 September. For "Didn't You Use to Use to Be You?", the majority of the footage featured the band performing the song on a stage, however some segments revolved around both Jim and Louise Lea sitting in front of a TV. In the segments, Louise Lea would address her vocal lines to Jim Lea, giving the impression that he is the song's character. At the time of filming, Louise was four months pregnant.