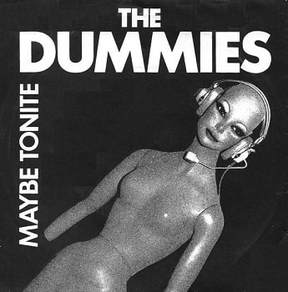 Maybe Tonite is the third and final single of the Dummies, a musical project formed by Jim Lea and his brother Frank. Released by Cheapskate Records on 6 February 1981, the song failed to make a chart appearance in the UK but did gain radio airplay. The song was written by Noddy Holder and Jim Lea, and produced by Lea.

"When the Lights Are Out", a cover of the 1974 Slade song, was released as the debut single in 1979. It gained extensive radio play, but suffered from distribution problems. By the time it was re-released on Pye Records at the beginning of 1980, the song was at the end of its airplay run and subsequently failed to chart. Despite this, the extensive airplay of the single convinced the pair to record more material as the Dummies and release a follow-up. "Didn't You Use to Use to Be You?", released in 1980, was specifically written for the Dummies by Holder and Lea. The single generated much airplay and was expected to become a big hit, but suffered distribution issues.

"Maybe Tonite" was released in February 1981 as the final attempt by the Dummies to have a record enter the UK charts. It had been recorded in Portland Studios in London, and although it gained airplay, it did not enter the charts. Jim Lea later recalled of the Dummies project: "It proved that the songs I was writing were still viable. That was all I needed to know."

Release
"Maybe Tonite" was released on 7" vinyl by Cheapskate Records. It was distributed by RCA Records. The B-side, "When I'm Dancin' I Ain't Fightin'", was a Slade cover, which had appeared as a track on the 1980 extended play Six of the Best. Initial pressings of the single came with a picture sleeve. Both the song and its B-side were later included on the 1992 compilation album A Day in the Life of the Dummies, which gathered all of the Dummies' recordings.