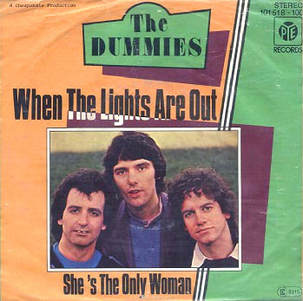 When the Lights Are Out is the debut single of the Dummies, a musical project formed by Jim Lea and his brother Frank. Released by Cheapskate Records in December 1979, the song failed to make a chart appearance in the UK but did gain much radio airplay. The song is a Slade cover, produced by Jim Lea, with the original having appeared on the 1974 album Old New Borrowed and Blue.

By this time, Frank Lea had already convinced his brother to record Slade's "When the Lights Are Out" as a demo in 1978 at Ron Lee Studios in Walsall. Frank took the recording to London where it gained the interest of a major record label, who requested a proper recording be made. The pair then re-recorded the song in March 1979, with Don Powell providing tambourine. However, when the song was presented to the record label, they opted not to release it. Deciding to release it themselves, the Leas then formed Cheapskate Records. Frank wanted to prove that any independent label, with the right promotion and distribution, could release a hit single. Released in December 1979, the pair chose the name The Dummies for their project.

With 1,000 copies of the single pressed, Frank embarked on a promotional tour across Britain in the effort to generate radio play of the single. He was successful in having the single play-listed on many regional stations. DJ Paul Burnett of BBC Radio 1 chose the song as his "Record of the Week", with the station actively playing the song for three months. It was also Radio Luxembourg's "Record of the Week". However, the single suffered from distribution problems. By the time it was re-released on Pye Records in January 1980, "When the Lights Are Out" was at the end of its airplay run and subsequently failed to chart. In April, it was also given a release by Pye in Germany.

The extensive airplay of the single convinced the pair to record more material as the Dummies and release a follow-up. "Didn't You Use to Use to Be You?" would be released in 1980 and "Maybe Tonite" in 1981.

In a 1980 interview with the Slade fan club, Frank Lea said of the song: "Well, I had the idea about six years ago. I saw Jim and asked him to record it with me, but he couldn't because he was totally involved with Slade - what with them being pretty big at the time. Then, the Christmas before last he had some spare time, while his wife was in hospital having a baby, so I got him into the studio and recorded a demo of it." Speaking of the single's failure to chart, he revealed: "It was mainly due to distribution hassles. By the time that we got a good distribution deal arranged with Pye Records, the single was coming to the end of it's Radio One playlist period. It was played for twelve weeks on Radio One, three weeks on Capital, and for nearly three months on quite a few radio stations! So all the radio stations went along with us. It's laid down a really good foundation for the next single."

Release
"When the Lights Are Out" was initially released on 7" vinyl by Cheapskate Records. In January 1980, it was re-released by Pye Records, who also released the single in Germany in April that year. The German version of the single featured a full colour picture sleeve.

The B-side, "She's the Only Woman", did not involve Jim Lea, but was a 1975 recording by a band Frank Lea was in called Thunder. In a Slade fan club interview, he said: "That was also recorded at Ron Lee Studios, but it was done in 1975. It was recorded by a band that I was with at the time, the first band that I'd ever been with. We were given a day in the studios to record four demos, and "She's the Only Woman" was one of them. The version of the song that was used as the B-side though wasn't that track, it was just a cassette of it. We didn't know where the "masters" of it were, so we had to use a tape of it! It saved us the expense of recording a proper B-side."

Speaking of the single's German release, Frank Lea said: "It's been released for a month. What usually happens is that European territories usually go with records that chart over here. But ours didn't quite make it, although it wasn't very far out. What happened was that I think the record company in Germany saw it flop in Britain, and then they didn't put so much enthusiasm behind it. I may be wrong, but I think that it deserved more than it got from them."

The song was later included on the 1992 compilation album A Day in the Life of the Dummies, which gathered all of the Dummies' recordings. "She's the Only Woman" was not included.