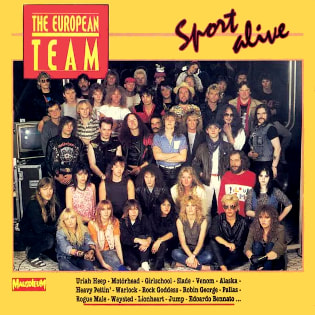 Sport Alive is a song by the European Team, a collaborative effort between a number of British and European artists, which was released as a charity single in Belgium on 1 July 1985. The song was written by the European Team and produced by Frank Eyssen, Jürgen Krämer and Erhard Schulz.

Background
"Sport Alive" was recorded as a charity single to raise money for the UEFA-Fund for Brussels, who in turn distributed it in aid of the victims (and their relatives) of the Heysel Stadium disaster. The disaster occurred on 29 May 1985 at the European Cup Final between Liverpool F.C. and Juventus F.C.

Approximately an hour before kick off, a disturbance began with Liverpool fans in Section X throwing objects and stones at Juventus fans in the adjacent Section Z. Groups of Liverpool fans then breached the fencing between the two sections, overpowered the police and charged at Juventus fans. In their attempt to flee, many ended up being pressed against the perimeter wall, the lower portion of which soon collapsed. 39 people were killed and 600 suffered injuries. The disaster resulted in UEFA banning all English football clubs from European competitions for five years. Fourteen Liverpool fans were found guilty of manslaughter and imprisoned for six years each.

The idea of recording a charity single stemmed from German producer and music manager Frank Eyssen, who co-produced the single and acted as the project's co-ordinator. Joining the project alongside the German band Jump, the European Team was formed in June 1985 and included members of Slade, Uriah Heep, Motorhead, Girlschool, Heavy Pettin', Venom, Rock Goddess, Lionhead and Shy, among other artists.

"Sport Alive" was adapted from an earlier song by Jump and for the charity project it originally had the title "Little Caesars". Kerrang reported the song was written by Eyssen alongside members of Scorpions and Jump, although on the single's sleeve the music and English lyrics would be credited to the European Team. The Italian lyrics are credited to Edoardo Bennato.

Jump recorded the song's lead vocals and backing track at Horus Sound Studio in Hannover and Edoardo Bennato added his vocal contributions at Trafalgar Studio in Rome. The European Team, including Jump, provided the chorus' group vocals at Roundhouse Studios in London. Some musicians who were due to appear on the day of recording at Roundhouse failed to show up. All expenses relating to the recording and release of the single were covered by the artists and companies involved​.

It was originally intended to release "Sport Alive" in the UK too, through EMI Records, with its earnings to be put towards the Daily Mirror's fund in aid of the disaster, but this did not come to fruition. The proposed B-side was to feature snippets of interviews with the artists forming the European Team.