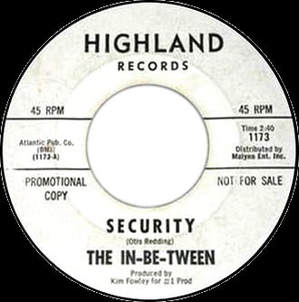 Security is a promotional single from the 'N Betweens, released in the United States by Highland Records in 1966. A cover of the Otis Redding song, the 'N Betweens version was produced by Kim Fowley.

Background
Slade had originally formed as the 'N Betweens in 1966. While performing in a London club, American record producer Kim Fowley saw the band and proclaimed them as "the next big thing". He arranged to have the band record six tracks at Regent Sound Studios. One of the songs was a cover of Otis Redding's "Security", which was soon released by Highland Records in the United States as a promotional only single. However, a lack of promotion led to the single soon being withdrawn. A cover of the Young Rascals song "You Better Run" was given a full release in the UK that year.

"Security" was not the only Otis Redding song to be covered by the 'N Betweens. The first song that Noddy Holder, Dave Hill, Jim Lea and Don Powell ever played together was "Mr. Pitiful" at the Three Men in a Boat in Walsall.

Release
"Security" was released on 7" by Highland Records in the US only. The B-side, "Girl Child, I am an Evil Witchman", was a reworking of the Artwoods song "I Take What I Want" with new lyrics and would appear as the B-side to "You Better Run" as well. Today, the single has become highly collectable. The song later appeared on the 1996 compilation album The Genesis of Slade.