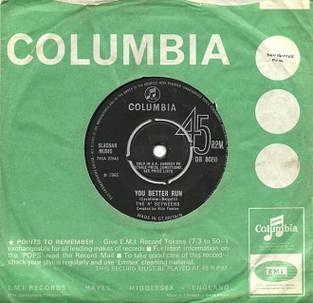 You Better Run is the debut single of the 'N Betweens, released by Columbia on 2 December 1966. It failed to make a chart appearance in the UK. A cover of the Young Rascals song, it was written by Felix Cavaliere and Edward Brigatti, Jr., and produced by Kim Fowley.

Background
Slade had originally formed as the 'N Betweens in 1966. While performing in a London club, American record producer Kim Fowley saw the band and proclaimed them as "the next big thing". He arranged to have the band record six tracks at Regent Sound Studios. A cover of Otis Redding's "Security" was released by Highland Records in the United States and in December 1966, a cover of the Young Rascals song "You Better Run" was released in the UK. The single was not a commercial success, although it did sell well in the West Midlands area due to the band's large following there. It reached No.1 on the regional Midlands Singles Chart and stayed there for six weeks. At the same time, another local band called Listen, featuring Robert Plant, also released a version of the song, though it did no better than The 'N Betweens version.

In the 1999 BBC documentary It's Slade, Dave Hill recalled: "I seem to remember we tried to get the local store to stock 500 copies or something, and try to get people to buy them to try and get it in the charts. It didn't work!" Don Powell later recalled in his 2013 biography Look Wot I Dun: "Even though the single got plenty of airplay, it didn't sell well." The song's commercial failure resulted in Columbia dropping the band from the label. Fowley also lost interest in the band and returned to California. The band would not release any further material until their 1969 debut album Beginnings on Fontana Records.

Recalling the creation of the record, Lea told Martin Hayman of Sounds in 1972: "He took us into the studio [and] we made a record with him. I think it cost thirteen quid to make; it was in and out, you couldn't make anything satisfactory out of a thirteen quid session. He was raving over us, give the bloke credit where it's due, he did see something in us. But the record was a flop anyway, it sold about five copies."

Speaking of the song in his 1999 biography Who's Crazee Now?, Noddy Holder said: "It was mainly songs we had been doing on stage, including one called "You Better Run" which was originally by the Young Rascals. A lot of the material in our set wasn't well-known in Britain. "You Better Run" had been a No. 1 in America, but I don't think it was even released over here. We sought out songs like that on purpose. We used to go to a record shop in Birmingham called The Diskery for all the new American imports and "You Better Run" was a record from there. We loved it and we were already playing quite a few other Young Rascals songs in our set. Kim obviously knew "You Better Run", but he had never heard anyone play it like we did."

Release
"You Better Run" was released on 7" by Columbia Records in the UK only. The B-side, "Evil Witch Man", had appeared as the B-side to "Security" and was a reworking of the Artwoods song "I Take What I Want" with new lyrics. In addition to the main release, a promotional version of the single was also issued. Today, the original single has become highly collectable and bootlegged copies have been distributed in the past. The song later appeared on the 1996 compilation album The Genesis of Slade.