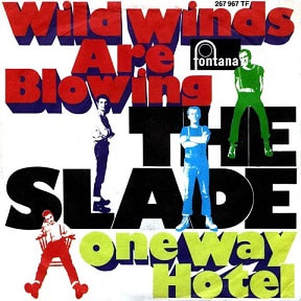 Wild Winds Are Blowing is a non-album single, released by Fontana on 24 October 1969 under the name "The Slade". It failed to make an appearance in the UK charts. The song was written by Bob Saker and Jack Winsley, and produced by Chas Chandler.

Background
Following the lack of commercial success of their 1969 debut Beginnings, Ambrose Slade, with their new manager Chas Chandler, began considering their next career move. Having not been pleased with the debut album, Chandler thought the band would benefit from writing their own material and a change of image. He decided that the band should project a skinhead image in the effort to generate interest in the band. Both Dave Hill and Jim Lea were mortified by the revised image, but the band agreed to try the idea and adopted Dr Marten boots, braces, cropped hair and aggressive "bovver boy" posturing.

Coinciding with the new image, Ambrose Slade changed their name to "The Slade". Shortly afterwards, Chandler was sent "Wild Winds Are Blowing" by a publishing company. He felt the song, written by Bob Saker and Jack Winsley, was perfect for Slade and had them record it. Released in October 1969 on Fontana, the single failed to chart.

In a 1977 interview, Don Powell singled out the song as the only one embarrassing to him and the band. He said: "There's only one, "Wild Winds are Blowing", but that wasn't one of our songs anyway. That came from the office at Brook Street. We didn't know any better in those days." Noddy Holder later recalled in his 1999 biography Who's Crazee Now?: "It was a good pop-rock song, not too commercial. It was really our first proper single, although we had released two tracks from Beginnings, neither of which was ever going to be a hit."

Release
"Wild Winds Are Blowing" was released on 7" vinyl by Fontana Records in the UK, Germany and the Netherlands. Both the German and Dutch releases came in a colour picture sleeve. The B-side, "One Way Hotel", was written by Lea, Holder and Don Powell. The song was initially exclusive to the single, but would soon appear as an album track on the band's 1970 album Play It Loud. The original 1969 B-side version features jazzier guitar parts that were removed or replaced for the version that appeared on Play It Loud.

"Wild Winds Are Blowing" later received greater recognition when it was included on the band's 1973 compilation album Sladest. The album topped the UK charts. In 2006, Salvo included the song on The Slade Box and as a bonus track on the double-CD album Beginnings/Play It Loud.

Promotion
A music video was filmed to promote the single. It featured the band performing the song at Philips Studios in London. After remaining unseen for many years, the video surfaced in 2016. To further promote the song, the band made their first national TV appearance on Alan Price's Monster Music Mash. The band performed "Wild Winds Are Blowing" live, along with a cover of The Beatles' "Martha My Dear", which they had covered on Beginnings. The band also appeared on the London news programme Scene at Six, and performed the song during a BBC studio session around the same time. Prior to and on the single's release date, adverts promoting it appeared in New Musical Express.