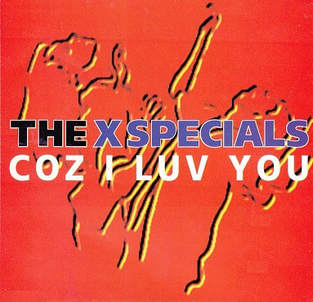 Coz I Luv You is a non-album solo single featuring Jim Lea collaborating with members of the Specials. Released under artist name The X Specials, the single was set for release by Receiver Records in 1994, but was quickly replaced by the Jimbo featuring Bull version of the song. A cover of the 1971 Slade hit, "Coz I Luv You" was written by Noddy Holder and Jim Lea, with this version produced by Lea.

Background
Following Noddy Holder's departure from Slade in 1992, Lea chose to leave the band too, preferring to continue working in the studio on his solo material. Aside from his work on a solo album, which would not be released except for the single "Hello Goodbye", Lea also collaborated with Neville Staple, Roddy Byers, Horace Panter and Lynval Golding of the Specials, producing a new version of "Coz I Luv You".

Although copies of the single were pressed through Receiver Records, it was reported by the Slade International Fan Club in early 1994 that the single had been "put on a back burner" due to artistic and contractual differences between Lea and his collaborators. The fan club editor Malcolm Skellington commented: "Sad to see Jim's project with the X Specials put on the back burner, we'll have to live in hope that JWL will resurrect this rather excellent single at some time in the future. I was lucky enough to hear a demo of this ragga/reggae version of "Coz I Luv You", Jim still plays a mean fiddle and I can't understand why the record will not be released."

Despite this, it was soon announced that Lea had re-recorded the song with the assistance of Delroy Williams. It would be released around March-April 1994 under the artist name Jimbo featuring Bull.

Release
"Coz I Luv You" was pressed on CD in France and made ready for a UK-only release by Receiver Records. However, the single was not released and was soon replaced with the Jimbo featuring Bull version of the single. Despite this, the pressed copies of the X Specials single have since been made available for purchase.

The single features three different versions of "Coz I Luv You"; a "Radio Edit", the "Violin Mix" and the "Ragga Mix". Although Lea produced the first two tracks, the "Ragga Mix" was produced by Mark Adams and Lynval Golding at Back A Yard Studio.